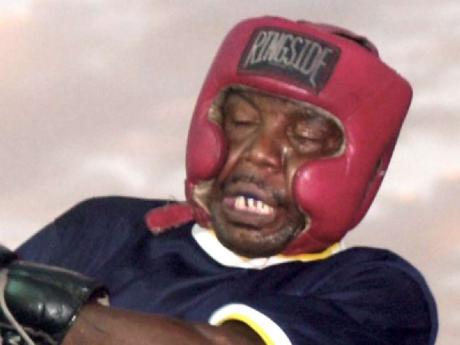 FIERCE punching to the body and head earned Ramel 'Sub Zero' Lewis a place in the finals of the Wray and Nephew Contender boxing series on Wednesday night as he knocked out Ian 'Hagler' Smith at one minute, 20 seconds of the second round of their semi-final contest that was scheduled for eight rounds at the Chinese Benevolent Association Auditorium.

It was an explosive performance by the 25-year-old underdog, who had promised to knock out his 45-year-old opponent, a seasoned professional, in one round. Lewis has earned himself the right to face another wily veteran, 43-year-old Donovan 'Police' Campbell, in the final on Wednesday, June 13.

There was a lot of talk preceding the fight, and at the weigh-in, both men predicted knockout victories. Smith said he would do it in four rounds, and Lewis said the fight would end in the first round. Lewis emerged the victor because of his superior punching power.

A newcomer to the professional ranks, Lewis was having only his third fight, all of which have been victories. He and his opponent were very cautious in the first stanza, which saw very little action as they used it as a feeling-out process. Once the second round started, however, the tempo increased appreciably. Lewis went after his opponent aggressively, but Smith made him miss with good body and head movement.

Lewis then tried a few jabs that landed, and Smith scored with two solid right hooks. Lewis missed the target with a few wild punches, then moving in closer to his man, he hit him with a straight right to the head, followed by a solid left hook, and the fight was over.

Smith took the full count then walked back to his corner slowly and obviously dejected.

Lewis, in the meantime, celebrated his victory to the cheers of an appreciative crowd.

The two amateur bouts on the card were action-packed. In the first, light heavyweight Kemahl Russell from Sugar Knockout gym scored an upset victory over Jonathan Hanson from G4S gym, who recently returned to Jamaica from the Olympic qualifying tournament in Rio. In the other bout, Nickoy Jackson from Boys' Town gym had a close victory over Anthony Clarke from Stanley Couch gym.

The Wray and Nephew Contender series, which is promoted by MJK Productions, is sanctioned by the Jamaica Boxing Board of Control and the sponsors are J. Wray and Nephew, Foska Oats, and TVJ.