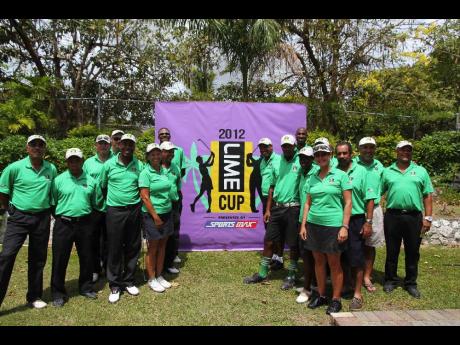 Members of the JustBet Springs team gather for a group photo after defeating CEEN Falcons 8.5-1.5 in round three of the SportsMax LIME Cup Golf Tournament at Constant Spring Golf Club last Sunday.- Contributed

AT EMMET PARK: Despite a century from National Water Commission's (NWC) Doman Williams, who slammed 120, his team went under by three runs to Sagicor.

The competition moves into its fourth round tomorrow with five matches scheduled. These are former champions LIME vs cup holders NHT in the feature match at Chalmers Avenue, BOJ vs Digicel at Mona Bowl, NWC vs JNBS at NWC playing field, Mona; Red Stripe vs Jamalco at Red Stripe, Spanish Town Road, and Jamaica Urban Transit Company (JUTC) vs Sagicor at Jose Marti. All matches commence at 10 a.m.

Former Arnett Gardens Premier League and August Town player, Aphas Bernard, scored a hat-trick for Petrojam, who gave Jamaica Customs a baptism of fire in their first match in Division One.

In the other opening-round match, Division Two teams JUTC and National Continental Baking Company played to a goalless draw. Prior to the opening matches, Scotiabank won the dress parade ahead of Xerox and Red Stripe.

On Thursday in Division One action, UWI, thanks to a brace from Harbour View Premier League goalkeeper Devon Haughton (playing out), clipped former champions Carib Cement 2-1 at Bull Pen.

Scotiabank Group and The Gleaner, both former champions, meet today in the first big Division One Business House football clash at the NWC playing field, Mona, starting at 3:30 p.m.

This will be a virtual replay of last season's KO final which was decided on penalty kicks in The Gleaner's favour.

Among them are defending champions Eagles, the Spanish Town-based Mister C, who have fortified their team with some top players from other clubs, as well as former champions Eastern All-Stars, who will now operate from a new venue in east Kingston, and the all-female team, Mystix Lady Strikers.

Kevin Reid, coach of Portsmouth Primary, the reigning champs of the Portmore LIME/INSPORTS All-Island Primary Football Competition, believes they have what it takes to surpass an experienced Gregory Park Primary in one of two semi-final clashes this Tuesday at the Portsmouth Primary playing field.

"We're going to use the same strategy we have used for the past four years, which has seen us being either champions or runners-up. We will take a more tactical and mental approach to the game to nullify the skilful players from Gregory Park," Reid said.

Leonardo Gordon and Tavajay Thompson will lead Portsmouth's charge, while Gregory Park's Demar Francis and Miguel Pickersgill will form the counter-attacks for their team. In the first semi-final, Bridgeport take on Independence City Primary.

When the Impulse-sponsored Portmore/St Catherine Domino League commenced last November, not many pundits would have picked Island Special Constabulary Force (ISCF) and Right Stuff to meet in the final. Both will look to create history as they slam bone at Caymanas Park tomorrow morning, match time 11:30.

In semi-final action last Sunday, to a partisan crowd, Right Stuff pipped Eradication on the line with a nerve-wracking 300-299 countdown win, while ISCF eliminated a spirited Colours Sports Club 300-267.

Based on form, ISCF should have the edge. However, Right Stuff gained a lot of friends because of the way they fought Eradication to the end in one of the most tightly contested matches of the season.

Peleko McRae scored a double as Naggo Head won the Michael 'Fisha' Edwards Football Corner League with a 3-0 triumph over Dunbeholden, at the Naggo Head playing field last Wednesday. Kevin Reid scored the other goal as his team dominated the action from the opening whistle.

This was Naggo Head's second title of the season, as they had also won the knockout crown when they defeated One North 1-0 back in February.

Naggo Head received $60,000 for the victory and second-place Dunbeholden pocketed $25,000. There will be a special presentation ceremony at a date to be announced.

It's just the third round of the competition, but yet there's a big clash as defending champions Wanderers (four points) square off against leaders Cumberland (six points) in the feature match of a triple-header in the Leander Marshall-sponsored Portmore U-13 Football League match at the Cumberland playing field this afternoon at 4:00. A win for Wanderers will see them leapfrog Cumberland for the lead.

Over 1,000 athletes from 25 schools are expected to participate at a prep school development track meet organised by Anthrick Sports Management today at the National Stadium.

This meet offers athletes their last chance to be ready for the Jamaica Independent Schools Association Preparatory Championships, which is set to be run next week.

Facey Commodity Company Limited is back on board as sponsor, and through its Delight and Ovaltine brands will commit $1 million towards today's staging. This is up by $500,000 from the inaugural staging.

Rivoli United and Federal United had the biggest margins of victory in the latest round of the LIME St Catherine FA Under-15 Football League matches over the weekend.