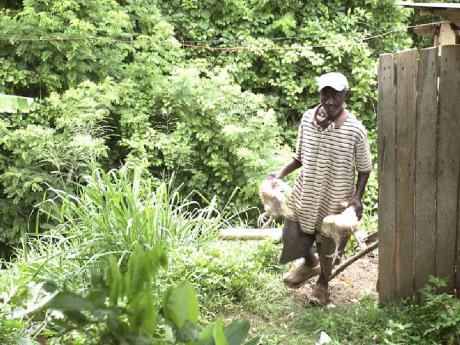 Aston Buchanan, a farmer and resident of Blenheim, Hanover, prepares two chickens from his coop for slaughter. On February 24, 1884, Blenheim was the birthplace of Sir Alexander Bustamante, Jamaica's first prime minister and a national hero. - Photo by Christopher Thomas

Despite having produced Jamaica's first prime minister and national hero, Sir Alexander Bustamante, the rural community of Blenheim in western Hanover is in dire need of infrastructure development.

Chief among the small farming district's woes is the absence of a steady water supply, forcing the residents to rely on rainfall, or to buy water in small amounts.

"If the good Lord didn't send a little rain, Blenheim would suffer for water. The riverbed is dry ... no water. We have to pay $100 for one little keg of water," said Aston Buchanan, an elderly farmer who has lived in Blenheim for 26 years.

"The National Water Commission people came and had a meeting with us around two months aback and promised we'd be getting water three days a week. From the meeting finish until this time, we get water one time by truck, and no more until this very time."

Another pressing issue in Blenheim is the neglect of its local community centre, which has stood unused since its completion through the Jamaica Social Investment Fund (JSIF) in 2000.

"We had a meeting with a lady who came from JSIF, and she said they would put furniture in it and get it open. I think $600,000 was allocated for the centre to put things in it. A hurricane came and blew down the old centre, so that one was built up anew. And from that centre finish until this, from 2000, it hasn't been opened as yet," Buchanan recalled.

"Because of that, people come and destroy it, tear it down ... . So it's down there right now, standing, and there's no activity inside the community."

Blenheim is home to a museum, which was constructed in Bustamante's honour, including a replica of his thatched farmhouse. The facility has been rebuilt twice, in 1984 and 2005, after fire damaged the structure on both occasions.

Buchanan declared that even this historical site has been neglected.

"We see nothing happening inside there. Bustamante is our first prime minister and we need some development inside there. We should have even a guest house down there because visitors come from outside to come in here every year (when) they have his birthday on February 24."

Groundskeeper at the Bustamante Museum, Robert Leslie, alleged that the lack of water in the community is due to political bias.

"One day, they came around with some water, and there were some people following back of the truck saying, 'That house must get, that house must not get'," said Leslie.

"If is not spite, how water come around Flat Quarter (a neighbouring district)? Them run the lines around everybody's houses in Flat Quarter," Leslie continued.

"Thru most people around here is mostly Labourites, they say they're not sending no water down here, so that's how we don't get no water. The line is there already - we have some decent lines - just to pump the water through it."

Leslie says Member of Parliament (MP) for Western Hanover, Ian Hayles, should spearhead development for Blenheim without politicising it.

"It's not that the MP doesn't want to do a thing. The MP can try, but he needs to know which strategy he's going to come forward with because it always comes down to politics," added Leslie.

Born in Blenheim on February 24, 1884, Bustamante founded the Bustamante Industrial Trade Union in 1938 and the Jamaica Labour Party in 1943. He was appointed Jamaica's first prime minister when the nation gained Independence in August 1962. He died on August 6, 1977, on the 15th anniversary of Jamaica's Independence.