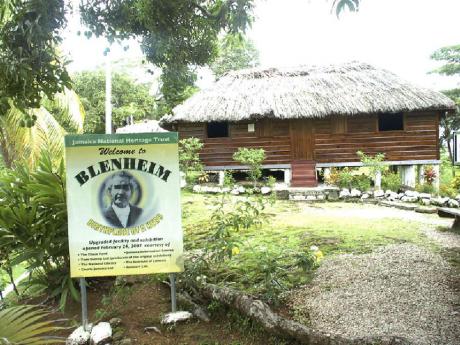 A section of the Bustamante Museum in Blenheim, Hanover, with a replication of the farmhouse where Sir Alexander Bustamante lived. Bustamante, Jamaica's first prime minister and a national hero, was born in the community on February 24, 1884.- Photo by Christopher Thomas

Blenheim is a small farming community in western Hanover neighboured by the districts of Dias and Flat Quarter. It is situated nine kilometres from the parish capital of Lucea.

Blenheim is most notable as the birthplace and home of Sir Alexander Bustamante, who was born there on February 24, 1884 - and later founded the Bustamante Industrial Trade Union in 1938, and the Jamaica Labour Party in 1943. He was Jamaica's first post-Independence prime minister in August 1962.

The community houses a museum that was constructed in Bustamante's honour on three acres of land. On this plot of land is a replica of his thatched farmhouse, which was damaged by fire in 1984, and again in 2005, and rebuilt both times.

The house now contains mainly newspaper clippings, pictures and personal artefacts from Bustamante's life, while outside are boards bearing notable quotes of his. Each year, on February 24, a memorial service is held to honour his memory.

The facility was upgraded and its exhibition opened to the public by the Jamaica National Heritage Trust on February 24, 2007, to mark the 123rd anniversary of his birth.

The event was also attended by Twin Guinep Limited, the producers of the original exhibit, and other stakeholders, including the National Exhibit of Jamaica and the Institute of Jamaica. The area has since been declared a national monument.