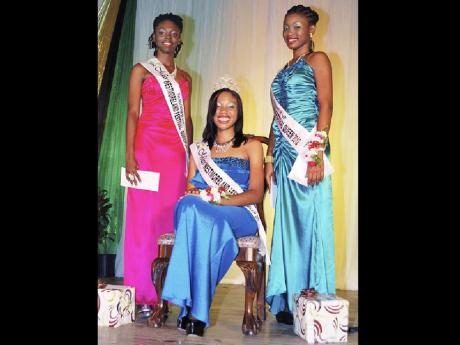 "The best way to make a difference is to be different" is the philo-sophy of 24-year-old Jessica Davidson.

She held true to her mantra as she used dancehall style for an original piece 'PATHE Tun Up' to wow the crowd, and ultimately, cop the title of Miss Westmoreland Festival Queen 2012.

The competition was contested by 10 outstanding young women who ranged in age from 18 to 24 years old.

"The JCDC (Jamaica Cultural Development Commission) worked with me on that talent piece that was written by a good young lady, Tamara Titus (a lower sixth-form student at Manning's School), and I'm indebted to her," Davidson told Western Focus.

"I want to believe that all of us are strong ladies and all of us are talented, so I only knew I was the winner when they called my name. It's going to take cultural awareness, poise, and becoming more involved as I move on to the national finals because this is what the competition has taught me, and I intend to go out there and represent Westmoreland to the best of my ability and give it the best of me."

Davison also walked away with three of the six sectional prizes: Most Culturally Aware; Best PATHE Item; and Best Performer.

The evening was completed by performances from the male quartet, Kahlil; Joesann Lewis, and a dance trio from the Georges Plain Primary School in Westmoreland.