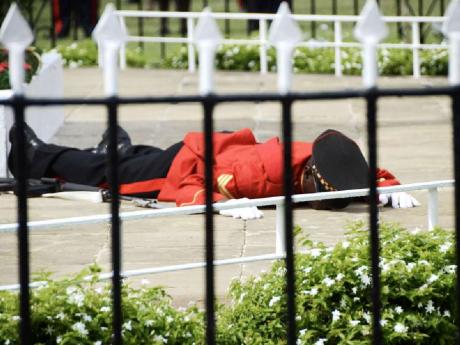 Fainting (syncope, 'black-out') is a very dramatic event for those experiencing and witnessing one. It usually causes anxiety among the bystanders as it is often someone who previously seemed well. It is important, though, that someone with a calm demeanour takes control of the situation and makes the right decisions.

Syncope is a temporary state where a person loses consciousness but regains it fully shortly afterwards. The person affected loses all voluntary muscular control, and, hence, becomes limp. If not prevented, the person usually falls in an uncontrolled manner and may even get hurt in the process.

The person is usually unaware of what goes on around him while this is happening. If someone becomes weak and sits, becomes dizzy, or his surroundings become black without him losing consciousness (near-syncope), or if it was caused by injury such as a head injury, then this would not be considered as syncope.

Before a person faints, he may feel weak, lightheaded, nauseous, have a sensation of the place spinning, vision may fade, or hearing may become muffled. The brain is at the highest point in the body and can only use glucose as a source of energy, so it is very sensitive to certain changes that take place in the body.

The blood carries oxygen, glucose, and other nutrients to the brain, and if the supplies are inadequate, then one may lose consciousness.

If there has been loss of blood because of bleeding, or if the blood count is low (anaemia) for whatever reason, then one may faint. Dehydration from vomiting, diarrhoea, or excessive sweating may also cause fainting. Pain, straining (e.g. from constipation), severe situational stress (shocking news) can cause fainting as they cause a temporary drop in the heart rate and blood vessel tone.

Abnormal levels of salt and hormones and unsafe levels of medications in the blood may also cause fainting. Pregnancy puts pressure on the major veins in the body and can reduce the return of blood to the heart and can contribute to fainting.

If you see a person fainting, it is best to allow the person to get flat on the ground safely and get the legs elevated. It is also best for the individual to get medical attention, especially if he doesn't regain consciousness quickly.