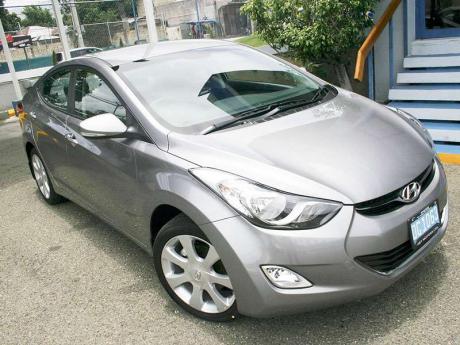 The 2012 Hyundai Elantra with its distinctive eagle-eye headlights. - Photos by Christopher Serju 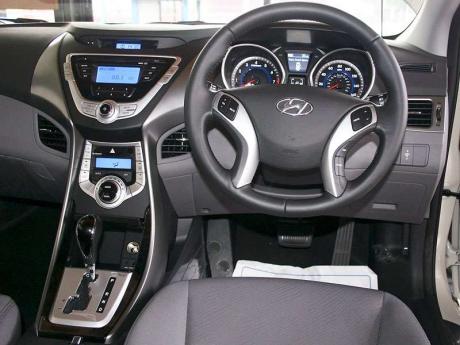 Approaching the 2012 Elantra I was immediately drawn to the headlamp, which upon closer examination, I realised, does bear a strong resemblance to an eagle's eye. It is an eye-catching detail which sets the tone for the fluidic sculpture design Hyundai has effectively used to blend power with style. It's easy to see, even at a glance, why this vehicle was voted eighth most beautiful car in the world.

Priced at between $2.7 and $3.2 million, the variation based on the set of optional features you settle on, this vehicle is the best value for money in its class currently available on the local market. I decided this following a test drive of the 1.8-litre model (the Elantra is also available with a 1.6-litre engine) even before learning about the attractive warranty package from Elizabeth Fitz-Coy, executive assistant, Spares, Sales and Service, at Key Motors Limited, local Hyundai dealer.

The three-year warranty now also comes with three-year roadside assistance and one-year free service, including oils, lubricant and labour, Fitz-Coy emphasised. "You pay nothing for the first year to have your vehicle serviced. That's to encourage you to service the vehicle regularly and keep it in the condition you buy it for the best motoring that you can get from it," she said.

The power driver's seat makes positioning fun, and only the presence of sales representative Ramon Gossett kept me from indulging in my desire to really play around with it, as he took me through the different features. It became immediately clear that much attention has been paid to the instrument cluster, with everything within easy sight and reach. Designed for comfort as much as safety, the vehicle underwent "extreme and significant" testing which is reflected in the design, according to Gossett, as he mentioned that it enjoys a five-star safety rating.

And then there is that primary purpose for which most of us acquire a vehicle - driving. With Gossett and Fitz-Coy in tow I took the Elantra through its paces, speeding up, decelerating suddenly and swinging out from behind traffic. With the exception of traffic cops, I was King of the Road for those all too fleeting moments.

I was particularly impressed by its quick response as I accelerated, then cut speed and shot forward again as my new-found best friend responded beautifully each time, with no lag time. Fitz-Coy attributed this to the alternator management system Hyundai uses to monitor engines and deliver power on demand, and in this case it does just that, delivering as much as needed at the time it is needed.

I am not the only one with whom the Elantra has struck the right note. It was named the 2012 North American Car of the Year in January by a jury of 50 independent auto-industry journalists. Just over a month later, on February 16 the Elantra was named the 2012 Canadian Car of the Year at the Canada International Autoshow (Toronto Auto Show). And in December 2011 it was named the Autobest 2012 model by Autobest Among Emerging Markets, the organisation of leading motor writers in 15 of Europe's emerging markets. These include Poland, Russia, Turkey and Hungary.

Driving around in the mid-morning Corporate Area traffic I could not help but comment on the relative quiet of my air-conditioned environment and was promptly advised of the triple seal on the doors, which locks out noise. At 40 miles to the gallon I thought about hitting the North Coast for lunch and returning in time for a 2:00 o'clock appointment and, if not for the presence of my passengers, might have yielded to the temptation.

As I pondered the various technological options available it crossed my mind that one could get lazy driving this vehicle, and then common sense kicked in again. No way, not with its six-speed automatic transmission and Shiftronic mode, which offers the option of shifting through all the gears, manually, from a 1.8-litre, double overhead cam engine with 150 horses pulling, which gives you the option of starting in second gear on slippery surfaces to minimise wheel slippage.

What could I have been thinking?

Looking deceptively small from outside, the Elantra has more than enough space to comfortably seat a six-footer in the front or back and the trunk space is cavernous, so literally it is big on value. To find out more about things like the driver selectable options where you can decide at what point you want the doors to unlock (for instance, if when you come to a stop you want the doors to unlock when you put it in park or when you press the off button for the engine) check out the Elantra at Key Motors, 29 Hagley Park Road, Kingston 10.