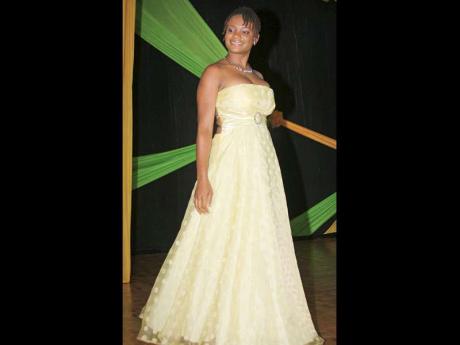 Trelawny Festival Queen Kimeika Campbell in all her radiance.- Photo by Richard Morais

The crown came down to a toss-up between the eventual winner and the third-place finisher, 21-year-old schoolteacher Monique Adams, herself a graduate of CASE who is currently pursuing a bachelor's degree at the International University of the Caribbean.

They were above the rest in articulation and talent and it could be the luck of the draw as to who would win if the coronation was the sole decider.

Apparently sensing this, MC, former Trelawny and Jamaica Festival Queen, Miss Kaysia Johnson repeatedly reminded the audience that the winner is not just decided on the night's act but that prejudging had taken place. Therefore, when Adams finished third instead of second it was easily accepted by the gathering at the Breezes Resort at Coopers Pen in the parish, where the coronation was held last Sunday.

The queen took the powerful sectional prize of Most Culturally Aware while Adams got Best Performance.

Oshine Gayle was the Most Congenial along with being the PATH Ambassador for her talent piece which highlighted PATH.

The show was run like one of those tightly run ships with the Trelawny Song & Dance Ensemble and the Positive Music Band providing the entertainment.

Campbell, a Bamboo Spring resident in Ulster Spring, has broken the jinx of not having a queen from the south winning the title.

Her academic journey has taken her from Ulster Spring Primary to William Knibb Memorial High and to Holmwood Technical High, where she presently is.