Rochelle-Lee Fagan walks away with title 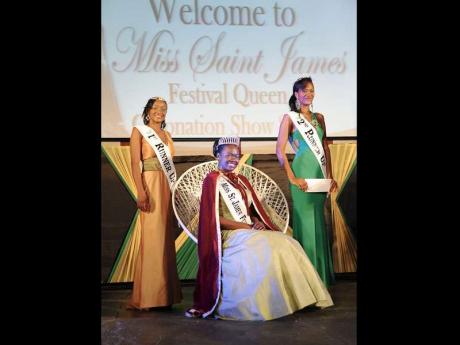 With a new location, better production, Jamaica Cultural Development Commission (JCDC) pulled off one of its most successful staging of Miss St James Festival Queen Coronation Show in Montego Bay.

The Montego Bay Convention Centre was transformed into a cultural masterpiece with décor done by Andrew Anderson where 2011 parish queen Sheena Sterling handed over the crown to Rochelle-Lee Fagan who blew away the competition and won the hearts of the judges.

As a trained teacher, who is fluent in Spanish and is employed as an audit analyst, 22-year-old Rochelle-Lee Fagan expressed humility with the win and said it would help to execute her goal of teaching young students Spanish.

"My initial reaction to the win was surprise because there are so many wonderful girls in the competition. I am a big advocate for young people gaining a second language and one of my goals as the festival queen for St James is to continue my pilot project in the Catherine Hall Primary School where students learn Spanish before moving on to high school, and I hope to replicate that in other primary schools in the parish," Fagan explained.

The talent segment by the 11 contestants was among the evening's highlights.

Derrio Johnson was the crowd favourite with her dub poem A Fi Mi Dream as she brilliantly embraced the role of an old woman who suffers memory loss and is trying to figure out how much Jamaica's culture has changed over the past 50 years.