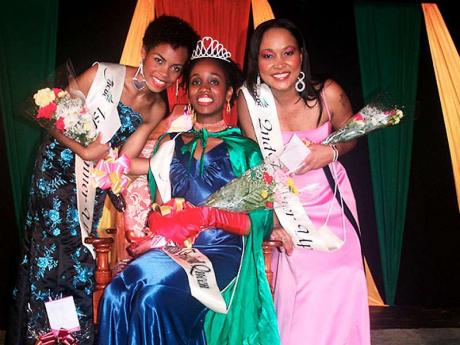 Twenty-one-year-old Jillian Watson has won the St Elizabeth Festival Queen Competition. Watson was a strong contender from the get-go. Her introduction was very assertive and her talent piece, an original poem inspired by Haki Madhubuti, was convincingly done.

Her place was further cemented when she responded to a question about what could be done to enhance the development of St Elizabeth.

Maximising agriculture by using St Elizabeth's notoriety as the breadbasket and employing value-added processes was Watson's response. She was rewarded with loud cheers by the crowd.

Receiving the sectional prizes as 'Most Culturally Aware' and 'PATH Ambassador' were indications that she was on her way to taking the crown.

The awards followed the announcement of the top three where Northern Caribbean University student Shawana Ebanks was named second runner-up, Tauna Thomas, Hampton School sixth-former was named first runner-up, while Watson copped the top honour of Parish Queen, much to the delight of the audience.

After the competition, Watson told The Sunday Gleaner she was elated and honoured to represent St Elizabeth. Her motivation for winning was the need to contribute to increased cultural awareness and the encouragement from friends, family and co-workers.