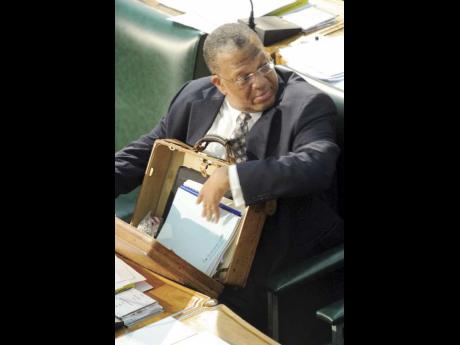 Finance Minister Peter Phillips has pushed a hard, pro-austerity line, vowing not to be swayed by calls for a stimulus Budget. - Norman Grindley/Chief Photographer

The Austerity Apostle Peter presented his 'New Covenant' Budget to the nation last Thursday, doing his daredevil walking-on-water feat, while keeping his eyes fixed on his Master and Saviour, the International Monetary Fund (IMF).

"Mr Speaker, the best gift that this Parliament can give Jamaica in this 50th year of Independence is a new and binding covenant with the people of Jamaica ... to achieve fiscal consolidation and debt sustainability." There was enough irony to go around as Finance Minister Dr Peter Phillips gave his maiden Budget presentation. There was Dr Phillips, former socialist, renouncing Old Covenant socialism and chastising the traditionally right-wing Jamaica Labour Party (JLP) for not faithfully following the dictates of the IMF; engendering a trust deficit-sacrilege. It was now the People's National Party's (PNP) task to repair the breach of trust with this noble institution, as "our relationship with the IMF stands at the centre of our economic recovery programme".

In his speech, Dr Phillips said his medium-term economic programme is not really the IMF's, but his sovereign Government's, as "the IMF agrees with our own assessment ..." and "our dialogue to date has been more than a negotiation".

Yet, in another section of his presentation, he made it absolutely clear who really was boss: "I want to remind my fellow Jamaicans that while they will be listening closely to what I present, ... there is another constituency in the financial capitals of the world that will be reading even more intently everything I say. It is not a constituency that we can afford to ignore because, in the end, it is their view of our intentions and our actions that will determine the response we get when we go to the capitals markets of the world." As Vybz Kartel would say, "Ahwoe!" He couldn't be plainer than that. As I said before, it's a creditors' budget. So there is a third party to this new covenant!

The finance minister did a fine job in walking between the raindrops (when he had come off the water). He did not give the Private Sector Working Group (PSWG) all it wanted in terms of abolishing GCT exemption on all basic goods (some would speculate he was restrained by 'higher powers'), but he threw them some concessions: beef patties, consumed by many poor people, will now be taxed by 16.5 per cent, and so will buns, crackers (except water crackers), biscuits, mackerel, condensed milk, syrup and corned beef. And printed material (I plead a bias) will now be taxed. So the trade in ignorance will be buoyant and more poor people will be deprived of an important medium of knowledge. (No, no, no, Gordon Robinson, Booklist Boyne will not be deterred from his obsession!)

The fulsome praise Phillips gave to the PSWG must
not be overlooked for its significance. He hailed the PSWG's work and
public education as "commendable and worthy of
emulation". Its investment of time, effort and resources
"indicates a level of patriotic commitment and an example of
civic duty which deserves the recognition of Parliament". He
had more: "I do not recall a time when so much effort has been
made to educate the public to a better understanding of the issues
surrounding tax reform." He that hath an ear to hear, let him
hear!

Incidentally, on the same day Dr Phillips spoke
in Parliament, The Gleaner had yet another editorial
cajoling the prime minister to support her finance minister in his
austerity thrust, pleading with her yet again to invest her political
capital to sell it to the nation as only she can. "These
[reforms] can't be Dr Phillips' programme, for no one
has the political capital of, or is more capable of articulating them
with the credibility than, Mrs Simpson Miller." The
Gleaner and the other mouthpieces of capital know Peter is
trying his best. If only Portia would just get with the
porogramme!

Phillips took the fight to his critics
frontally in his Budget speech and, in doing so, I think he acquitted
himself well. It was clear that he was responding to his most trenchant
and sharpest critic, financial journalist Ralston Hyman, who, with
commendable and stunning non-partisanship, has attacked this PNP finance
minister as savagely as he did the former JLP finance minister. Cynics
might say it's because Phillips did not appoint him as a consultant, but
judging on the surface, in this tribalised and intellectually corrupt
society, I find it highly commendable and praiseworthy that Ralston has
not changed his tune since the PNP came to power. He is an example to
others in media.

But
Phillips took on Ralston and others like Dennis Chung (who gave him a
good review afterwards on Nationwide, incidentally). He noted:
"There is now a debate as to whether Jamaica should take the
path of an austerity programme or implement a stimulus package ... .
According to this line of argument, the current Budget is too tight and
we should be engaging in more expenditure, especially on the capital
side, in order to grow our way out of the present
predicament." But Phillips said as
"seductive" as the thought is, "it is a
mirage". Then he went on to make what I think is an
unassailable point: a stimulus Budget would be a welcome prospect if our
debt ratios were lower. I, like Ralston, favour Keynesianism. But I
have to face reality.

Phillips is absolutely right
that "we can only borrow more if someone is prepared to lend us
in sufficient amounts. It is a matter of record that the international
financial institutions are not prepared to do so. What is more, if we
choose to go to the domestic capital markets to finance a sizeable
deficit expenditure, that would be at the cost of a reversal of the
downward path of domestic interest
rates."

We really need to have a serious
economic debate about alternatives. It is one thing to engage in
ideological rhetoric, or to peddle fantasy. As much as I decry the IMF's
hard-headedness and neoliberal dogmnatism, the reality is what it is.
If we tell the IMF and the international financial players to go to
hell, the poor will suffer more, at least in the short
term.

I agree with Ralston that this Budget is
unlikely to produce meaningful growth. I agree with him that the rate of
adjustment will prove too painful and is likely to be
counterproductive. I believe that the Austerity Apostle Peter has
presented a faith-based budget - no wonder he talks about a New
Covenant. Very appropriate to use religious terms, for it's gonna take a
miracle to bring about the economic growth he is aiming for. But he
could well say it is the worst Budget - apart from all the
alternatives.

Yes, the primary surplus requirement
might be too high. The reduction of the deficit might be too drastic.
Yes, Dennis Chung is right that the only way to deal with the debt
sustainably is to grow GDP.

Dialogue of the
deaf

But I hate the way we argue in this country. We
never engage our opponents. We engage in a dialogue of the deaf. Peter
Phillips has thrown down the gauntlet, and his critics must put up or
shut up.

Would the IMF and other multilaterals, as
well as the international financial markets, accept a Budget which was
more of a stimulus budget than an austerity one? Can Ralston and Dennis
say that? If we are not able to satisfy these kingpins, how do we secure
desperately needed funds? Is it possible not to massively cut the
public sector, slash all GCT exemptions, significantly raise taxes
beyond the approximately $20 billion in this Budget to create a stimulus
programme? How could it be done?

Yes, we can always
juggle tax measures here and there. Put more on rum and tax gambling
more perhaps. Raise property taxes (Without rent going up?) Would we be
able, through non-burdensome taxes and substantial savings, to present a
Budget that would be credible to the IMF? You might say I am
contradictory. No, I am just a realist or, more bluntly, a pessimist. I
don't have as much faith as Ralston and Dennis on the one hand, and
Peter on the other. I am a globalist who believes that unless
far-reaching changes are made at the global level, and unless there is a
radical reordering of the international economic system, countries like
ours are largely doomed for equitable
development.

But we have to cauterise our debt
problems. We have to drastically cut our spending. We cannot afford to
raise public-sector wages, as much as the pressures will be increasing
on public-sector workers. They will have to pay more for pensions. They
will have to pay more for the patties, buns, crackers and other basic
goods Phillips has raised in partial concession to the private sector.
They will be paying more for public transportation and a range of
services which will be raised by professionals and the self-employed who
will simply pass on their new $60,000 minimum taxes to the poor, as
well as their other taxes.

Some public-sector workers
who are being called on to tighten their belts will also be losing jobs,
as public-sector bodies now have to pay GCT. It means these bodies will
have less money to spend and, horror or horrors, Ralston and Dennis,
there will be even less money for capital spending. It will be rough for
the poor. Plus, Government is notorious for not meeting its revenue
targets, so there will be suppmentary budgets with more
taxes.

I hope Audley Shaw makes a rational,
statesmanlike presentation. Phillips was refreshingly honest in
outlining how his predecessor minister of finance in the 1990s ran up
the debt. He gave a fair assessment of how we got here. Shaw, who was
already responsible in Standing Finance Committee to say he backs the
public-sector wage freeze, must raise the bar of public discourse and
let the people know our real dilemmas. The truth is, neither PNP nor JLP
has "the answers".

Ian Boyne, a
veteran journalist, is the 2010-11 winner of the Morris Cargill Award
for Opinion Journalism. Email feedback to columns@gleanerjm.com and
ianboyne1@yahoo.com.