Human wrongs: don't look at us, look at United States 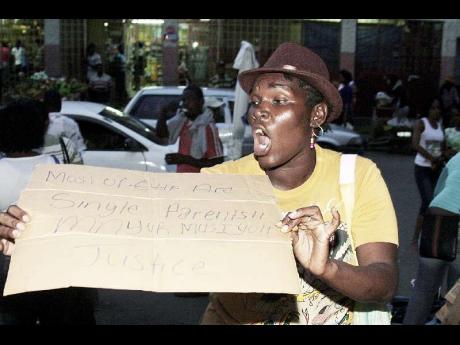 In this 2010 Gleaner photograph, a vendor protests alleged abuse by the Jamaican police in May Pen, Clarendon. Extrajudicial killings and police abuse have earned the local constabulary the ire of domestic and international rights advocates.- File

Of all the 193 nations in the world, I would like the international and internal critics of this little piece of rock with sand, sex, wood and hard water to write a list of 10 nations where: a woman can be head of government; women can have equal presence in media, including heading a major radio and a minor television station, and two of the country's six top cops are female.

Then, have them draw a diagram of nations where the journalist union is under lingerie leadership without having to take brief from male dictators. And then if the list is still long, do a qualitative and quantitative study to see how many other countries have more than 30 per cent of their news reports done by women. Indeed, just a few months ago, Britain-based newspaper, The Independent, conducted a study for International Women's Day.

The survey found that Jamaica, as part of the Anglophone Caribbean, has almost half its electronic and print stories being done by females and is deemed as the best place in the world for a woman to be a journalist. In contrast, Europe has just over a third of its media items being female-authored or delivered, with only nine per cent of editors being female.

Furthermore, the great Jamrock was ranked 23rd of 191 countries by Freedom House, the international association for media workers. In a statistical dead heat with the United States (US), which ranks a mere one point above our 18, we edge out both Canada and Britain and are fourth in the Americas.

The discussion starts with the press because not only is a free press the anchor of democracy, but it guarantees that the stories we tell about ourselves are true and more reliable than sectarian agents and agencies based inside or outside the country.

The recent Amnesty International report dragged the nation over the coals over its human-rights record because we have excessive state deadly force, violence against females and children, and the ubiquitous stigma of being a homophobic country. Of course, our local groups are quick to applaud from the stands as if a rare six were scored or a century made by a West Indian cricketer.

However, our strength is also our weakness, because we are quick to highlight the negatives about ourselves, oftentimes to the detriment of the true and complete story.

There is a Jamaican proverb, 'Duppy know who fi frighten', and while Amnesty is not wrong in highlighting the perceived wrongs in this country, it suffers from a lack of enough insight and understanding of the country and the data to make a proper analysis. Also, we in the media have failed ourselves in not placing the Amnesty report in a larger regional or global context. When that is done, there is enough basis to agree with the lyrically and discretionarily challenged DJ who says, "A yah so nice."

On the issue of police-performed homicides, the report states: "Several people were killed in circumstances suggesting that they may have been extrajudicially executed." Several can mean two or three, and I am willing to bet that the portion of deaths at the hands of the constabulary which are deemed to be 'controversial' is no more than 10 per cent. In any event, this country has a Bureau of Special Investigation and an Independent Commission of Investigations, which, along with the Office of the Public Defender, offer recourse for persons who are wronged. The State pays all the salaries of these agencies.

With far more resources, the great 'Land of Farrin' has major problems with excessive force. Amnesty notes that: "Forty-three people died after being struck by police tasers, bringing the number of such deaths since 2001 to 497 ... . Most of those who died were unarmed and ... not ... a serious threat when they were electro-shocked." Police were also accused of indiscriminately firing tear gas, bean bags and flash b1ang grenades into peacefully demonstrating crowds.

Then, alarmingly, three persons, including two minors, were shot to death by the US Border Patrol police for "allegedly throwing rocks at officers along the US border with Mexico". Even more shocking is the report that two were in Mexico on the other side of the border when they were fired upon, and the joke about bullets not needing to clear immigration is really not funny.

Frightening charges of cruelty in American prisons abound, and the 171 prisoners in Guantanamo, which President Obama had said he would have closed, are still there. Finally, and interestingly, the report found that in the summary execution, instead of the legal objective of the mission to apprehend Osama Bin Laden, and in the absence of clarification from Uncle Sam, "the killing of Osama bin Laden would appear to have been unlawful".

In a country with one of the highest homicide rates in the world, our underequipped Jamaican policemen and women are among the most often murdered by criminals globally. Yet, we haven't hanged anyone since the Devil was a boy, and please don't ask to whom I refer. Under pressure from the European Union and local human-rights groups, the Jamaican hangman himself either died of boredom of lack of exercise.

In contrast, to the chagrin of Amnesty, America executed 43 of its
own men last year and one can guess the percentage of them who were
non-white. In some of the cases, the condemned protested their innocence
up to their final breath.

While we are horrified by
the tragic occurrences at Armadale a few years ago, we have a Child Care
and Protection Act, which is forcing more people to report the abuse of
children. Thus the increase in some reports, as noted by Amnesty, might
simply lead to greater discovery levels than rates of
commission.

And while we have some issues with human
trafficking, only America and Somalia have not ratified the UN
Convention on the Rights of the Child, which, of course, the former
supports in principle. Still, incredibly, it is possible for a minor of
11 years in the US to be imprisoned for life without the prospect of
parole.

Finally, for all the efforts and resources, a
Washington Times report reveals that, "1.6
million children younger than 18 - native and foreign-born - have been
caught up in this country's sex trade". And the
"number of children sexually exploited in the US or at risk of
being exploited is between 100,000 and
300,000".

As regards the gay issue, there
are some who believe that Jamaica is a place where homosexuals run
around with targets on their backs in mortal fear because at every
street corner, they are so imperilled that before the 'B' word is
spoken, it turns to 'boom, bye-bye and the victims die'. However, large
numbers of gay persons are attacked in the US each day as well. And
despite Obama's about-face on gay marriage, his new stance is not
official policy. Rather, it is his "personal position, and ... he still
supports ... states deciding the issue on their
own".