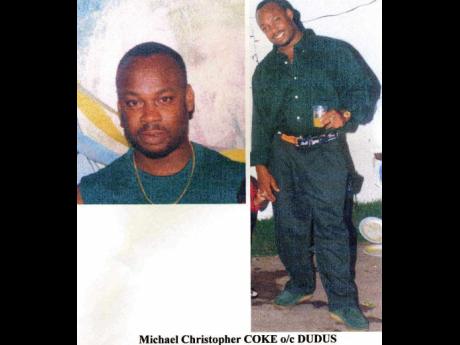 Christopher Coke had the lofty title, 'The President'.

The most profound issues raised by the evidence offered in the sentencing hearing of confessed Jamaican crime boss Christopher 'Dudus' Coke relate to the indictment of the Jamaica criminal-justice system. In the hearings held in the Southern District court in Manhattan, the prosecution adduced evidence of the monstrosities committed by Coke.

The witnesses were all Jamaicans serving time. Each had entered plea-bargain arrangements with the United States (US) government.

The most benign of these was the former assistant coach of St Jago who goes by the name Anthony Brown. And even so, his crimes in Jamaica involved his participation in a visa racket. In the US, he has been convicted of credit-card fraud and is awaiting sentencing for the distribution of cocaine, and Ecstasy pills.

The other two witnesses that were covered by the local Jamaican media include one serving time in Florida for drugs trafficking and murder - he goes by the name 'Cowboy' - and another whose name is represented as John Doe, convicted at first for illegal entry, but whose rap sheet includes murder and drug trafficking.

The latter two have confessed to participating in crimes of violence and distributing narcotics in Jamaica over a period of greater than 10 years. Importantly, none of the three men had even a misdemeanour filed against them by the Jamaican police.

In the case of 'Dudus', against whom compelling evidence has been proffered, the record of his crimes makes the Devil look like he isn't trying. The most heinous crime perpetuated by Coke, to my mind, is the evidence offered that he forced an 11-year-old girl to carry cocaine in her body cavity. Witnesses indicated that Coke masterminded a conspiracy to corrupt the Jamaican track-and-field programme, but using the cover of the high-school programme to provide access to the US for drug mules.

The stories of murder, violence and inducing and coercing women to become drug mules abound. One witness testified that he personally saw Coke murder four men, each on separate occasions, in using a different modus each time. The latter two witnesses testified that Coke had 200 armed men at his disposal who did what the "system" directed them to do, including murder and robbery for the purposes of supporting the "system" and its intentions.

The testimonies also indicated that the 200 goons were available to entrench the influence of the JLP in communities, and that they intimidated voters at the request of candidates and others. One witness testified of how vendors in Coronation Market paid money into Coke's "system", and if they failed to pay, they would be brutalised or they could not sell in the market.

The evidence adduced told how otherwise law-abiding citizens of Tivoli Gardens paid a tribute into the system, deducted out their wages; were forced to conceal weapons; and if they lived overseas while their relatives remained in Tivoli, tribute came by way of remittances.

The evidence given is corroborated by something told to me many years ago by a caller, who telephoned me utterly flabbergasted. The caller then told me a story of Mr and Mrs Johnson (not their real names) who lived in Tivoli Gardens and had three sons. Mrs Johnson was a member of a certain Pentecostal church in Kingston. Mr Johnson did not go to church. The second of their three sons lived in the US and was involved in racketeering and narcotics. The other two were law-abiding young men.

The caller said that the son who lived in the US was visited and robbed by Jah T. He also arranged a beating for the two brothers in Jamaica, for reasons that the caller did not know. Some time after Jah T returned to Jamaica, he was shot and killed on Maxfield Avenue, as he rode his motorcycle one Sunday afternoon. The caller said that the belief in Tivoli was that Mr and Mrs Johnson had worked obeah on Jah T and caused his death. This was said to Jim Brown, who was in General Penitentiary awaiting extradition to the US. Jim Brown confirmed the request for action to be taken against Mr and Mrs Johnson.

One morning, gunmen entered their house and shot Mr Johnson at the door. They went upstairs and shot Mrs Johnson to death. Mr Johnson survived but lost a lung. Later that same afternoon, their home was torched. Mr Johnson eventually became a member of the church at which his wife had been a member.

The most important thing to note in all of this is that Coke, who like most of us is a creolised son of a slave, was born in independent Jamaica. He is the most monstrous figure in the history of this country. No single figure has a longer record of criminality and notoriety than Dudus.

And yet, despite all of this, there is not a single arrest warrant for him issued in Jamaica. He was picked up twice by the constabulary, but with nothing at all against him, he was released the same day. It is almost as if where Coke and the Tivoli enclave were concerned, no police force existed in Jamaica, and there was no criminal justice system.

If that were all, it would have been bad enough. But that it is not all. The entire weight of the Jamaican State was used in the last Jamaica Labour Party administration to seek to prevent Coke from being brought to justice and to frustrate the rule of law. The PM of the day, Bruce Golding, put his political career on the line and lost it. He strained Jamaica's relations with Washington. The then mayor of Kingston was quoted in the media as predicting that dire consequences would follow if actions were taken against Coke. Further, he said that Coke was critical to the peace of Kingston.

A senator declared Coke an upstanding and law-abiding citizen. Her Majesty's Loyal Opposition, at first, withheld comment, for fear of politicising the matter. To be fair to the People's National Party, individuals such as Peter Bunting, who appeared single-minded throughout, and Senator K.D. Knight came to be associated with the triumph of the truth and the rule of law in these matters.

What is the use of the Emancipation if we are going to allow some to do worse for our people than was done to us by slave masters? In all honesty, Tivoli's emancipation will only have come on June 8, 2012 when Dudus is put away for the maximum sentence. No community should ever again be allowed to live with such tyranny.

The real work must begin now. We cannot simply be satisfied to continue to send away young people to populate the prisons of the North Atlantic. It is simply no way to be a country. To be independent is to take responsibility for oneself, including taking responsibility for one's wayward children. This is the fix that is needed.

We must, therefore, avoid the temptation to just move right along. We must take the time to cogitate and ruminate, if not meditate, about these things. Thanks to the arrogance or perhaps naivete of defence attorney Steve Rosen, who forced the prosecution to justify their demand for the maximum sentence to be imposed, we now know as a matter of record of the monstrosity.

We must weep for the unburied dead and their spilled blood not yet atoned for. We must vow to ourselves: Never again! Never again will we allow closed zones and political enclaves, as if a State within the State. Never again must we allow politicians or dons to rule over territories as fiefdoms. Never again must our courts and our security forces be so innocuous and benign in the face of monstrous criminality. Let Dudus be the last one.

Garnett Roper is president of the Jamaica Theological Seminary and chairman of the Jamaica Urban Transit Company. Email feedback to columns@gleanerjm.com.