Majestic mess! When $300 million in housing solutions is not enough for one community 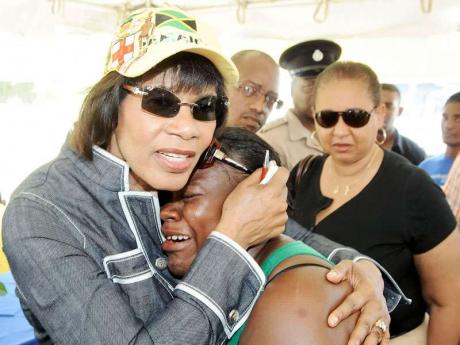 Kelcy-Ann Wynter cries on the shoulder of Prime Minister Portia Simpson Miller, her member of parliament, just over one week ago. - File 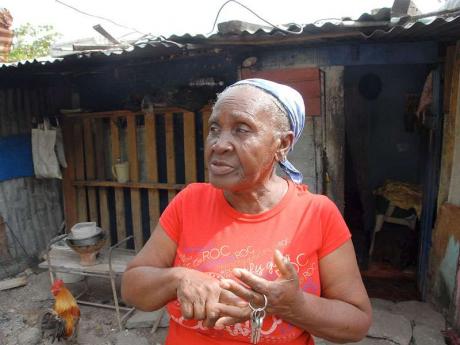 Cynthia Bryan, better known as 'Mama Joyce', is one of several residents hoping for an improvement of the conditions in Majesty Gardens. - Photos by Ricardo Makyn/Staff Photographer 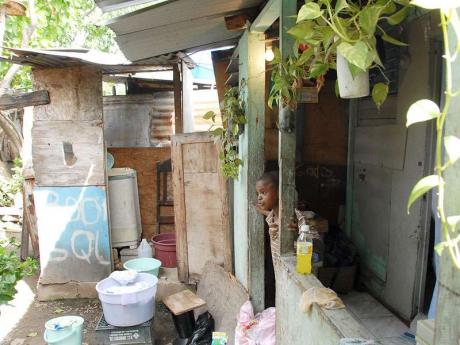 A child looks out from a home in Majesty Gardens in South West St Andrew.
1
2
3

The government's plan to spend close to $300 million to improve the housing stock in the depressed Corporate Area community Majesty Gardens will do very little to tackle what is a chronic problem facing the residents there.

With hundreds of households - some with multiple families - living in substandard conditions in the community, 96 two- and three-bedroom houses being constructed will make little change.

After lucky individuals get the keys to their new houses in December in phase one of the project, and several others shortly after in phase two, hundreds of families will still be living in squalor.

Maurice Anderson, technical manager of the Inner City Housing Project (ICHP) unit of the National Housing Trust (NHT), confirmed what a Sunday Gleaner tour of the community unearthed - the planned 96 new houses are just a drop in the bucket.

"Definitely, the need is there. There is no question about that," said Anderson.

"It is a drop in the bucket, and the other interventions have to come into play. It could be the Ministry of Housing, for example," added Anderson, who pointed out that phases one and two came as a result of the NHT's intervention.

Anderson also revealed that a survey conducted in Majesty Gardens, also known as 'Back To', showed that there were more than 600 households that needed some kind of intervention.

The ICHP head explained that the level of intervention needed varied from family to family.

Some have solid structures which needed improvement, while others needed the whole nine yards.

But despite the obvious need for more houses, Anderson could not say if the NHT would be building more units in the community. "I can't speak to a phase three right now," he said.

However, Anderson told our news team that the NHT would be seeking to tweak the design on phase two of the project to see if additional units can be accommodated.

During two visits to the community last week, our news team moved past high-rise buildings - close to the Spanish Town entrance to the community - to a section where rusty zinc was seen everywhere, on top of houses or as makeshift fences.

A foul odour had a strong grip on some sections of the community, and it was clear why Kelcy-Ann Wynter was moved to tears as she explained her depressing situation to her member of parliament, Prime Minister Portia Simpson Miller, just over one week ago.

Members of our news team had to watch their every step as they walked through one section of the community.

It was clear that Majesty Gardens is desperately in need of garbage receptacles, as rubbish is being dumped everywhere.

The living situation gets worse as you go deeper into the belly of the community.

Adults and children were seen bathing in the open.

The community is plagued with improper and inadequate sewage facilities and a plethora of other social and structural ills, all of which bear witness to the fact that well-needed housing intervention under the Inner City Development Program being spearheaded by the NHT is not enough.

Wild pigs and stray dogs were also seen in the community, relying on the steady flow of garbage for their food.

At first glance, it appeared they were dead because they were not moving, but a closer look revealed that the hogs could hardly blink an eye. They were filthy looking and gathered in an area along the gully side that was blanketed by a rather putrid scent.

Still, there are silver linings behind the dark clouds that hover over the community.

In one of the rusty, zinc-lined lanes is a well-maintained green area. It's an oasis in the midst of a depressed community.

In an attempt to express how badly Majesty Gardens needed the NHT-led intervention, an elderly resident likened the community to a swamp.

Morris lives in a run-down dwelling that he and his children inherited after the original occupants fled the community. "Ah yah so we live. Mi nuh shame fi show you," said Morris.

Cardboard is used as a sunscreen under a section of the zinc roof of Morris' ramshackle home. The senior citizen is hoping his family benefits from the housing solutions.

Cynthia Bryan, more popularly known as 'Mama Joycie', has lived in the community since 1949, when her grandmother was paying six shillings for rent.

At that time, the community was known as Majesty Pen.

She too welcomed the housing solutions, but agreed that the 96 houses would not satisfy all the needs.

"It is very bad. The zinc-fence mentality ... we would like to live up. It name a Garden, but not looking like one now," lamented the 73-year-old.

She believes the moral fibre of the community has disintegrated in step with its physical infrastructure.

Bryan bemoaned the fact that it is no longer the village that raises a child.

"The discipline has fallen ... . We woulda like fi see yah so nice," said the senior citizen.

Thirty-three-year-old Melissa Patterson also underscored the dire need for better housing solutions in the community. "We really need the houses badly. We need proper housing. Down here needs to be developed into a place that can encourage our children that they can do good and good can come from them," said Patterson, a mother of five.