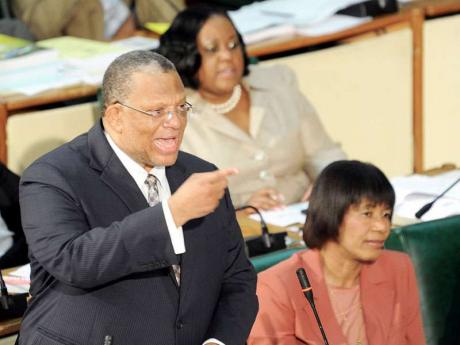 IN HER contribution to the Budget Debate in April 2009, Portia Simpson Miller, then Leader of the Opposition, introduced the nation to Tenniel. Simpson Miller told the Parliament that Tenniel has been impacted several times by the tax package announced by then finance minister Audley Shaw.

Three years later Simpson Miller, now Prime Minister, sat beside Dr Peter Phillips, the Minister of Finance, as he read out $19.3 billion in new taxes, which will affect every Jamaican including Portia's Tenniel.

"The disposable income in nominal terms will remain the same but she would have to buy less because of the GCT spreading on a number of goods," Roberts said.

"This budget does not do anything to substantially advance the disposable income of the working class, which is absolutely necessary if Jamaica is to get out of this economic crisis," said Roberts.

In 2009, as she rejected Shaw's tax package, Simpson Miller told the House of Representatives that Tenniel was a single mother and a secretary in the public sector. At the time Simpson Miller said the young woman was earning $500,000 per annum.

Shaw, in that Budget, had announced that the income tax threshold would be increased as at January 1, 2010 to $441,168 per annum. He told the Parliament that he was giving back to the PAYE taxpayers.

Simpson Miller was not amused by Shaw's generosity. In fact, she said the savings from the raising of the threshold would be wiped out by new taxes.

"Based on the Minister's give-back announcement she will get back approximately $52,000 per year, not immediately, but starting in January," Simpson Miller noted then.

With Tenniel, like other public sector workers forced to endure at best incremental increase in income since Simpson Miller spoke in 2009.

Roberts estimates that if she had not changed jobs or received a promotion Tenniel's income would have moved up to $535,000.

She is to get a break by the movement in the threshold, but will have to wait until January next year.

Among other tax measures, Phillips announced the widening of the GCT base, resulting in raw food items, with the exception of chicken, books being subject to GCT. The move is to yield $4.2 billion for the government.

Phillips also announced a reduction of the GCT rate from 17.5 per cent to 16.5 per cent.

Roberts said this give back by the minister "will be wiped out by the removal of GCT exemption from a number of basic food items."

Economist Aundre Haughton told The Sunday Gleaner yesterday that with the increase in the income tax threshold people like Tenniel will see an increase in their disposable income.

He said, however, that persons like her will have to pay more tax on the goods from their consumption basket, but argued that "the net effect is still positive on the side of those who earn 500,000 or less."

Junior Rose, the president of the People's National Party Youth Organisation (PNP YO), is however not convinced that the new GCT regime is in the interest of poor and working class Jamaicans.

"We are going to be asking the minister to reduce the status quo as it relates to GCT," Rose said, noting that an emergency meeting of the executive of the PNPYO has been called to discuss the matter.

"The Government has inherited a situation which is untenable and so it required tough decisions. We commend the attempt but we have to look at some of these challenges that ordinary persons face at this point in time," Rose said.

In the meantime, it was not only the change in the GCT regime that irked Simpson Miller in 2009. She was highly critical of the gas tax that had been imposed.

As she continued to tell Tenniel's story, Simpson Miller said that at the additional $8.75 per litre for gas and assuming that today's gas prices were to hold steady, her gas bill would increase by $2,200 per month or $26,400 per year.

"This would leave $25,600.00 from the Finance Minister's give-back," Simpson Miller argued.

Despite advocating while in Opposition for a capping of the ad valorem tax on fuel, Phillips budget does not move in that direction.

Phillips' tax measure will increase by 50 per cent, the cost for motor vehicle licence plates, licences, fitness and registration fees.

The minister last Thursday introduced a special consumption tax (SCT) on denatured ethanol used in petroleum products. He, however, said the tax is unlikely to lead to an increase in prices.

Phillips also indicated that it is unlikely that the Government will be able to grant salary increases to public sector workers for the next contract period.

"If inflation outrun is seven or eight per cent, which is what it was last year, then that person would have seen a decline in real terms by at least 15 per cent over the two years," Roberts argued.

In the meantime, Roberts added that people like Tenniel will suffer and the economy will not achieve growth unless the Government uses tax policy to stimulate the economy.

"The government will have to provide, through the lowering of the tax rate, an increase of the tax threshold and a reduction in the GCT, more disposable income in the hands of the working class so that they can now begin to consume, which will stimulate business to invest from which economic activity will be generated and growth will be achieved," Roberts argued.