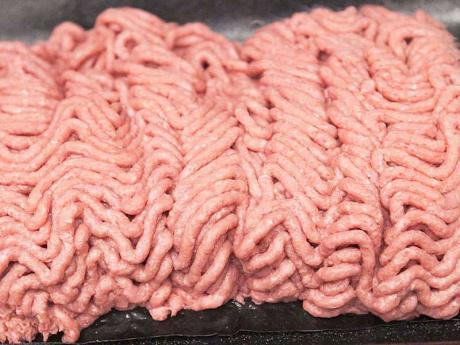 In this March 29 file photo, the beef product known as lean finely textured beef, or 'pink slime', is displayed during a plant tour of Beef Products Inc in South Sioux City, Nebraska, where the product is made. - AP

Jamaica's ministries of agriculture and health have pooled their resources to ensure that a controversial beef product dubbed 'pink slime' does not enter the local market.

Most local producers of beef patties and beef burgers have also denied using the product which is at the centre of a firestorm in the United States (US).

Many US grocers and businesses have pulled the product from their shelves even though some food industry experts insist that it is safe.

With news emerging that some Jamaican entities are importing beef cuttings, concerns were raised locally that 'pink slime' could find its way into local products.

But Dr Osbil Watson, director of the veterinary services division at the Ministry of Agriculture and Fisheries, told The Sunday Gleaner that the Government of Jamaica has never issued a permit for the importation of 'pink slime'.

Boycotted in the US

According to Watson, local experts do not know enough about the controversial product, which has been boycotted by thousands of US residents.

"We would want to err on the side of caution. We would say no at this time," said Watson.

"We have been in discussions with our counterparts at the Ministry of Health to get a better understanding of it, even though we don't import it," added Watson.

A number of local entities also reported that they have stayed away from 'pink slime'.

Sean Scott, CEO of Wisynco - the operators of Wendy's franchise in Jamaica - told our news team that it does not use 'pink slime' because it is of the view that this is a substandard good.

"We believe it's an inferior product. We haven't allowed this practice in our history, and we don't allow it now," said Scott.

He continued: "We're very proud of the quality ingredients of our hamburgers: One hundred per cent pure beef - no fillers, no additives, no flavour boosters (and) no ammonia treatments."

Scott said his company's beef patties are sourced from a local processor who imports beef trimmings from approved Wendy's suppliers.

It was a similar story from Garrett Williams, financial controller at Juici Patties.

He told our news team that while his company imports beef products it is unlikely that this is 'pink slime'.

"We import through a broker who is based in Canada but the product comes from packing houses in New Zealand and occasionally from Australia," said Williams.

He pointed out that each container of beef products shipped to Jamaica must receive permits from the veterinary department of the Ministry of Agriculture in Jamaica and its counterpart in New Zealand.

Denise Dixon, marketing manager at Restaurant Associates Limited, operators of the Burger King franchise in Jamaica, told The Sunday Gleaner that her company does not import beef.

"All our beef products are purchased locally from Jamaica Broilers who manufactures to the exacting specifications of Burger King International," said Dixon.

She argued that the beef product called LFTB or 'pink slime' does not meet Burger King's specification standards.

One of the country's largest beef patty producer, Tastee Limited, did not respond to The Sunday Gleaner up to press time.

According to the Ministry of Finance's official website last year, $4 million to import beef trimmings, but despite several calls and questions sent via email the company has not responded.

The company that manufactures LFTB - Beef Products Inc. (BPI) - has defended the quality of its product.

However, a massive boycott has forced it to to close three of its plants and cut some 650 jobs.

In the early 1990s, Eldon Roth, a savvy American entrepreneur, came up with a way to turn meat trimmings (which was mainly used for pet food) into profit.

He heated them, spun them in a rotating device to separate the tiny particles of meat from fat, then treated the product with a puff of ammonium hydroxide gas to kill bacteria.

It became known in the industry as "lean, finely textured beef," or LFTB or pink slime, and Roth made a fortune selling frozen bricks of it to add to ground beef.