80 days and counting... Loved ones clinging to slim chance that missing men are still alive 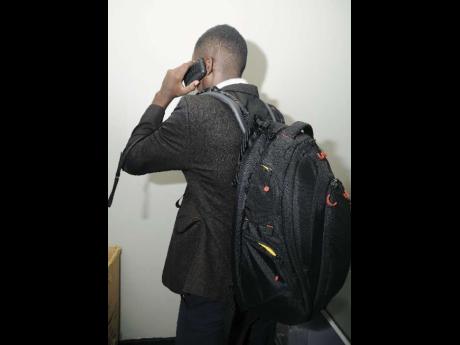 The dark lines under their cloudy eyes spoke more forcefully than words could enunciate.

Their eyes told a tale that life has been floating by through streams of tears and anguish, ever since their loved ones went missing in early March.

It has been almost 80 days since 10 Jamaican men vanished without a trace from The Bahamas, but their loved ones are still clinging to the probability that they are still alive.

Reports are that the men went missing while on a boat that was Florida bound.

A release issued by the Ministry of Foreign Affairs and Foreign Trade last week stated that the diplomatic arm of the Government is continuing its "efforts to ascertain the whereabouts of the Jamaicans reported missing in The Bahamas, and who allegedly travelled to Florida from that location by boat on 9 March 2012".

Meanwhile, the families and friends have to play the waiting game. They are unwilling to accept that the hope that their loved ones are still alive is frail.

The women who love them believe that the men they love are incarcerated somewhere ... anywhere.

Word on the street is that the men were killed by those they had paid thousands of United States (US) dollars to illegally transport them to the US.

Children in the dark

Joy Brown, 33, whose common-law husband of 18 years is numbered among the men, told The Sunday Gleaner that she has been hiding from their children the fact that their father is missing.

"It is hard because every minute they are asking for their father. I have to be telling them that he is in jail," said Brown.

"Me bawl, of course, because a whole heap of years we have been together," she added.

The mother of three - a 17-year-old, a nine-year-old and a two-year-old - refuses to believe the stories that the father of all her children was murdered at sea and thrown overboard.

Brown told our news team that her boyfriend boarded a flight destined for The Bahamas on February 26, 2012. He told her that he was going there to get a job so he could make a better life for her and their children.

She said he called her after he arrived on that island.

They spoke again on March 9; that was the last time they spoke.

During that conversation, her boyfriend revealed to her that he was leaving for the US. She still doesn't know if he made it.

"From the 9th of March, mi no hear nothing from him again," she said. She insisted that although 79 days have elapsed since the men vanished, presumably at sea, there is still a possibility that they are not dead.

According to Brown, more than a year has to go by before she can accept that that small window of opportunity has closed. Then and only then will she be prepared to embrace that "the worst might have happened".

"I have to see a year come and done and gone into another year, then I will just tell them (the children) the truth that their father was trying to make life better for you and it didn't work out," said Brown.

Lamoy, a 28-year-old from Payne Avenue in St Andrew counts her boyfriend and uncle among the missing 10.

She told our news team that her boyfriend landed in The Bahamas on January 29 of this year.

She said her boyfriend, who is an auto-body repairman, told her that he was heading to The Bahamas to seek a job.

"I followed him to the airport when he was leaving for The Bahamas. I didn't know anything else," she said.

Lamoy revealed that she spoke with her 28-year-old boyfriend every day, up until he disappeared on March 9. She, too, looks haggard and admits that she has cried incessantly since learning of his disappearance.

They have been together for four years. They don't have any children together, but Lamoy has two sons and he fathered one son. Like Brown, Lamoy has not told the children that he is missing.

She, too, refuses to believe that the man she loves is dead. However, Lamoy recognises that the odds are stacked against him being found alive.

Lamoy told The Sunday Gleaner that her uncle left Jamaica for The Bahamas about a week before her boyfriend did.

She said her boyfriend told her that he had seen her uncle once. Lamoy insists that her boyfriend is no criminal and would not try to swim his way into the United States. "My boyfriend can't swim a tip. Him a nuh fish," she said.

Beth Saundersis 24 years old and her swollen eyes painted a grim picture of her personal grief. She, too, spoke with her boyfriend for the last time on March 9. "I spoke to him in the day and he went missing in the night," she recalled.

The Waterhouse resident told our news team that her 40-year-old boyfriend left for The Bahamas on vacation. It was supposed to be for two weeks. "He left on the first (of March) and his return ticket was for the 11th," she pointed out.

During that last conversation on March 9, her boyfriend told her that he would be going fishing with some friends. After several calls to his cellphone in the night went unanswered, Saunders started to worry. It has been close to three months since that day, but Saunders is still clinging to the hope that he is alive. "I don't want to think that (he is dead)," she said.

Her friends have been encouraging her that she might soon hear from him. "I am just afraid of not getting that call," she said. She too hides the truth from her son. "He sees me crying at times and the kids around the community are asking him questions. Some of them even tease him by saying, 'Shark eat your stepfather'," said Saunders.