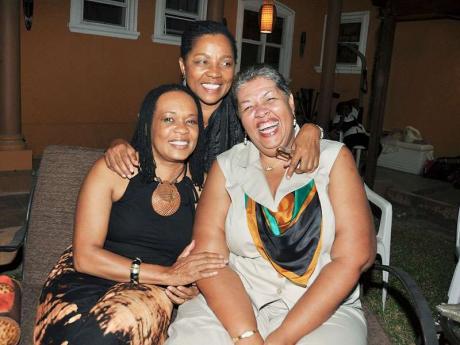 The lady of the hour, Jamaica's new high commissioner to the UK, Aloun Assamba (right), and pals Donna Scott-Mottley (centre) and Jacqueline Samuels-Brown at the 'Rum Tree Posse' farewell party in her honour at Peter and Andrine Higgins' residence in Mona, St Andrew, Sunday afternoon. - Photo by Janet Silvera 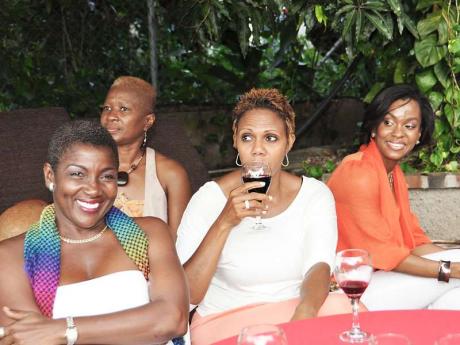 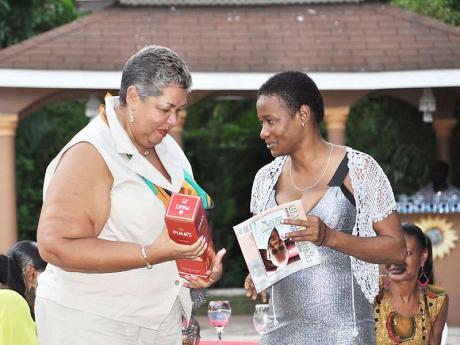 Jacqueline Samuels-Brown, QC, led the toasts to the freshly minted 'assambador' heading to the kingdom. Rum Tree Posse member Dr Dianna Davis-Smith predicts that in a few weeks, popularity poll results will indicate that the new "most popular person" is none other than Aloun Assamba!

Samuels-Brown objected to not being considered for posse membership despite her training and experience, and the presiding MC hasten to assure her that her presence was part of the ritual.

Last Sunday afternoon, Jamaica's new high commissioner to London, Aloun Assamba, was hosted at the final farewell party in her honour. For three weeks, every single day a party was held in her honour.

Held at the residence of Peter and Andrine Higgins in upper St Andrew, Aloun, a crab-eating lover, was fêted by the intimate group of friends who have grown to love and respect her for her warmth and generosity of spirit.

Samuels-Brown reminisced of Aloun's multifaceted talents evidenced by her starring in numerous cultural events on the university campus in Barbados, her cooking skills and drink-mixing knowledge. Samuels-Brown, a member of the Class of 1980, noted further that every picture of Aloun is striking, in that they reflect an inner personality that offers love and support. She left the stage expressing assurance and confidence that the new ambassador will represent Jamaica well.

Donna Scott-Mottley followed her colleague and friend in the toasting the new ambassador. She extended the accolades to include Aloun's family - one that embraced all of Aloun's friends with love and food.

"The essence of a friendship such as that shared with Aloun is that she is constant, reliable, always a call away and makes time to celebrate major milestones in each and every one of her friends' lives."