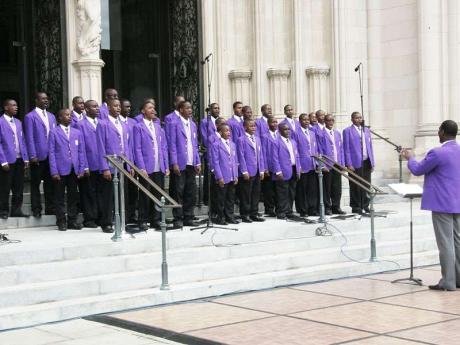 Kingston College Choir in performance at the Jamaican Embassy in Washington. - Derrick Scott

The delightful mix of gorgeous flowers, other horticultural products, and iconic cultural offerings put Jamaica centre stage in Washington, DC. For two days, the small island with the big heart stole the hearts and minds of the people of the US capital.

'Jamaica 50, Feel the Heart and Soul of a Nation' was the title chosen for the island's floral exhibition, which won rave reviews at the Flower Mart 2012 Festival, the premier annual festival that brought together some 50,000 people at the Washington National Cathedral earlier this month.

"Jamaica's participation in the show this year helped to enhance it." That affirmation came from none other than Flower Mart Chairman Vickie Longosz in summing up the response to the Caribbean nation's presence at the 73rd staging of this annual spring celebration of flowers.

"The performance of the Kingston College Boys' Choir brought tears to my eyes," she shared unabashedly. "We brought something different to the Flower Mart that has never been done in our 73 years of holding the show and this year was something special."

Declaring Jamaica's floral arrangements, other exhibits, music, art, drummers and food "just a phenomenal hit", Longosz went on: "For the over 20 years since attending the flower show, I don't think I've experienced such friendliness and warmth of a people." Jamaica is "the first Caribbean country to ever be selected to be featured, and that is a testament to the country. I can only say thanks to the Jamaican Embassy and the participants."

It was, of course, a very proud moment for Cherryl Gordon, chargé d'affaires at the Embassy of Jamaica in Washington, DC. She welcomed her country's selection as the featured attraction this year for Flower Mart, saying, "It gives us an opportunity to showcase our country's rich heritage and to give the hundreds of showgoers an
opportunity to experience a little piece of Jamaica's flora, art, food
and music."

In fact, this premier event on the Washington, DC,
calendar marked the Jamaican Embassy's first official event for 2012 in
the year-long programme to commemorate the Caribbean nation's 50th
anniversary of Independence.

The Kingston College Chapel Choir
performed over the two days, as well as at the preview party on the May 3
and was an instant hit. They rendered a string of stirring music,
including European classical favourites as well as popular Jamaican
pieces and folk songs, such as Many Rivers to Cross,
Jah is My Keeper, Linstead Market.
At the opening ceremony, the Kingston College Chapel Choir was joined
by the Cathedral's St Alban's Boys' School Choir.

The
Akwaaba Drummers, led by Phillip Supersad, and young violinist Nadjé
Leslie, also impressed. Leslie, one of Jamaica's outstanding
award-winning musicians, so mesmerised the distinguished patrons that an
encore performance was called for.

Beaming with
satisfaction was horticulturist and Custos of St Andrew, Marigold
Harding, who has designed Jamaica's floral entry for Flower Mart for the
past six years. This year's design featured green anthurium, andreanum,
obaki anthuriums, yellow oncidium and cymbidium orchid blooms,
philodendrom and pothos leaves, which graced two naves of the
century-old cathedral.

Craft items, quilts and wearable art, courtesy
of the Norma Ramsey-Davis, were on sale, as well as a selection of books
by authors Dorel Callender, Felicita 'Terry' Robinson and Curdella
Forbes. Along with Beverley East and Doreen Thompson, these fine
Jamaican ladies gave readings from their books and a talk on Caribbean
cuisine in the cathedral's breathtakingly beautiful St Joseph's
Chapel.

Jamaica's multitalented master potter Phillip
Supersad also shared his skills in a series of pottery demonstrations - a
rare treat for the adults and children alike - who got to try their
hand at the potter's wheel. Supersad's work was also featured as part of
the exhibition of fine art and craft by Jamaican artists housed inside
the cathedral which included Jacqueline Bishop, Alphanso Blake, Paul
Blackwood, Bernard Stanley Hoyes, Donovan Marks, Opal Palmer Adisa,
Cheery Stewart-Josephs, H. Lloyd Weston and the Rose Hall Artisans and
Rose Town Potters.

Among the attendees at the show
were the Bishop of Washington, Rt Rev Mariann Edgar Budde; interim dean
of the Washington National Cathedral, Dr Francis H. Wade; president of
All Hallows Guild (the Flower Mart organisers), Carol Kelleher; with
former president of the Jamaican Senate, Professor Oswald Harding, on
hand as well.