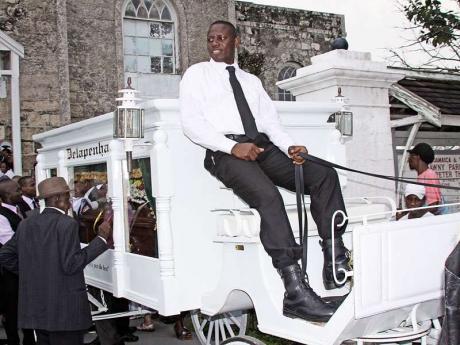 The carriage, a replica of the one used to carry the body of the late US civil-rights activist Rosa Parks. We obtained the carriage from a company in Detroit.

Traffic came to a standstill in Falmouth, Trelawny, last Saturday afternoon as spectators watched in awe as the first modern-day horse-drawn carriage funeral procession passed through their town.

Stretched out inside the carriage, en route to the Mass of Resurrection, at the historic Trelawny Parish Church, was the late Dahlia Geraldine Magnus, a woman described as a specimen of a public officer.

Magnus, who served in Local Government for several years, died at age 93 on April 29. She was sent home in what Dale Delapenha of Delapenha Funeral Home described as, "A fitting tribute for a very classy and dignified lady."

The carriage, a replica of the one used to carry the body of the late US civil-rights activist Rosa Parks, was an asset the Delapenhas had planned to unveil at their Royal Rest Cemetery in Hanover.

"We obtained the carriage from a company in Detroit after researching who manufactured the one used to carry the civil-rights icon," said Delapenha.

It was indeed fitting that a woman who had served both the parishes of St James and Trelawny, and who persons in the Local Government circles saw the 'legal luminary', although not a lawyer, should be honoured in a fine style.

Magnus' chariot was escorted by the police, and the line of traffic that followed was reflective of a public figure.

"She can be described as principled, but not overbearing, businesslike, but not strict. Her administrative ability, her alertness of mind, her readiness of wit, her sense of humour, her outstanding resilience, years of experience, dignity and competence are but some of the qualities which singularly and collectively enabled her to discharge her duties," stated a citation of her life as a public servant.

Dahlia Geraldine Magnus was born on June 18, 1920. She was married to the late Dr Victor Magnus.