Sammy gets his 100 but WI toil 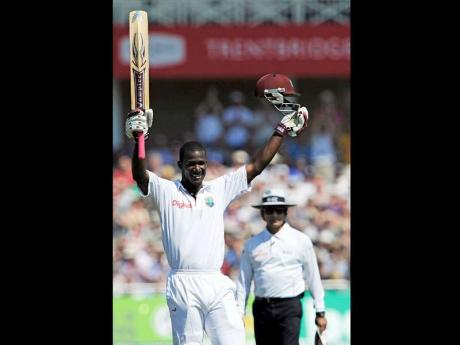 Captain Darren Sammy completed his maiden Test century but opposite number Andrew Strauss stroked his second in as many matches to lead an aggressive England reply on the second day of the second Test here yesterday.

Sammy's knock lifted West Indies to 370 all out at a sun-drenched Trent Bridge after the visitors resumed the day on 304 for six.

At the close, however, Strauss was unbeaten on 102 and Kevin Pietersen had marched to an imperious, unbeaten 72 as England finished the day on 259 for two, just 111 runs in arrears.

The pair have added a rollicking 136 for the third wicket, capitalising on ineffective Windies bowling on a pitch tailor-made for batting.

Fast bowler Ravi Rampaul, with two for 42, has taken both wickets to fall.

Earlier, Sammy made headlines when he converted his overnight, unbeaten 88 to 106, 20 minutes after the start of play to complete a cherished milestone in his 26th Test.

Overall, he faced 156 balls in 211 minutes and struck 17 fours and one six in what was his second first-class century.

Samuels, meanwhile, added 10 to his overnight 107 before becoming the second wicket of the morning after an innings spanning 261 balls, 346 minutes and including 16 fours.

The pair extended their record seventh-wicket partnership to 204 - the highest by any Test team in England - as West Indies added a further 66 runs for the loss of their last four wickets before they were dismissed half-hour before lunch.

Sammy started the morning confidently, moving into the 90s with a booming off-drive off seamer Jimmy Anderson before making his way to three figures with a couple of streaky boundaries off fast bowler Stuart Broad in the next over.

The first flew over gully as he drove expansively and the second whistled through virtually the same area off a leading edge, as Sammy celebrated.

He eventually fell 25 minutes later when he pulled Tim Bresnan to Pietersen at deep square leg, in the fast bowler's second over of the morning at 340 for seven.

Kemar Roach and Shane Shillingford then held up England for nearly half-hour before Roach edged Bresnan to Strauss at first slip for seven.

One shot too many

Shillingford, who played adventurously for 16 off 21 balls, played one shot too many and was stumped off Graeme Swann, after charging down the wicket to the off-spinner's second ball of the morning.

Bresnan picked up three of the four wickets to fall to finish with four for 104 while fellow seamers Anderson (2-73) and Broad (2-81) claimed two wickets apiece.

In the third over of the innings before lunch, Roach had Cook for one with the score on two and then bizarrely repeated the scenario with Cook on 12 at 19 for one after the interval.

Cook, however, failed to make West Indies pay for their indiscretion as he added just 12 before nicking Rampaul through to wicketkeeper Denesh Ramdin after he had added 43 with Strauss.

England then flourished thanks to two partnerships as Strauss put on 80 for the second wicket with Jonathan Trott and the up tempo stand with Pietersen for the third wicket.

Trott scored a breezy 35 from 54 balls with seven fours but failed to add after tea, trapped in front by Rampaul the first over on resumption.

Position: England trail by 111 runs with eight wickets in tact.