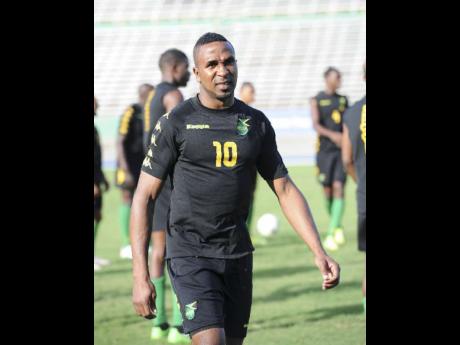 One of Jamaica's most celebrated strikers Ricardo 'Willy Boo' Fuller knows this could be his last opportunity to represent his country on the world's biggest stage, as the Reggae Boyz vie to make it to the 2014 World Cup in Brazil.

The 32-year-old striker's technical ability and work rate is expected to be on show for Jamaica for the 55th time today when the Boyz entertain Panama in an international friendly at The Office.

"This is probably my last chance, because I am 32 now and the World Cup is 2014, so that's another two years to go, so that means I will be 34," Fuller reasoned. "So it's probably my last chance and hopefully we will actually make it this time around, and it would be nice for me to actually finish my international career playing for Jamaica in the World Cup in 2014," he added.

Fuller last represented Jamaica in October 2010 versus Trinidad and Tobago but has returned to the fold for the World Cup campaign, which will see the team first tackle Guatemala on June 8 at the National Stadium in the next round of qualifiers. Jamaica's group is completed by the United States and Antigua and Barbuda.

Fuller, who represents English Premier League outfit Stoke City, is fully aware that he cannot do it by himself but wants to play his part.

"Football is a team effort; it is not played by one man. I have created so many (goals); I maybe should have scored a few more goals but that is way football is. I always try to do what I can do and as much as I could do it."

Jamaica's only voyage to the World Cup was back in 1998 at which time Fuller was a part of the Under-20 programme. He, however, believes the mood within the current squad reflects what was going on in the 1998 programme.

"The togetherness is there, which the team had in 1998 when we qualified, and I wasn't much a part of that as I was a part of the under-20s, but I have heard stories and I was in the camps here and there," Fuller shared. "It is similar, so a lot of good attributes and a lot of good and positive things I see right now that was there in 1998," he added.