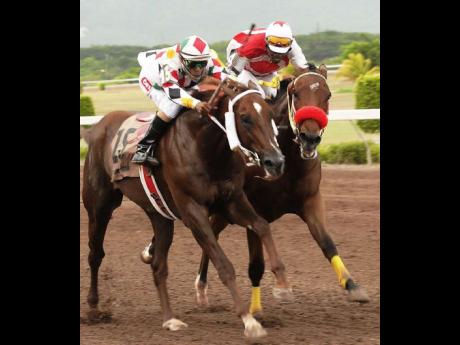 The unbeaten three-year-old TYPEWRITER and HUPOMONE shared the spotlight on yesterday's nine-race programme at Caymanas Park with impressive wins in their respective races.

The local-bred gelding, TYPEWRITER, passed his Derby prep with flying colours in the restricted stakes for native and imported horses over 1820 metres, powering home by 43/4 lengths with in-form jockey Shane Ellis aboard.

Installed a 4-5 favourite in a field of nine, TYPEWRITER, who is conditioned by trainer Spencer Chung, was settled just off the early pace in third as the American colt UPPA TUNE (7-1) led comfortably from THERE GOES JUSTIN passing the half mile.

TYPEWRITER was soon sent in chase of UPPA TUNE and went by from early in the straight to win easily from American-bred ARGUMENT DONE, the 6-5 second favourite. He covered the distance in the good time of 1:57.2 on a slow surface to be unbeaten in three starts.

By Western Classic out of Docs' Paladin, TYPEWRITER, who is owned and trained by connections of reigning 'Horse of the Year' SAINT CECELIA, will now take his chances in the June 9 Derby.

Chung was pleased with the performance especially with TYPEWRITER going two turns for the first time.

"This is a horse with lots of scope and I'm looking forward to running him in the Derby", said the trainer.

Ellis, meanwhile, now faces a dilemma in that he has choice of rides between TYPEWRITER and the recent Lotto Classic (Governor's Cup) winner ALL CORRECT for champion trainer Wayne DaCosta. However, his agent, Derrick 'Chungie' Keith, confirmed that the 2000 champion jockey will ride TYPEWRITER in the Derby.

Later in the afternoon, the American 3-y-o filly HUPOMONE, with leading jockey Dane Nelson, duly made it four-in-a-row with a post-to-post victory in the 3-y-o and up overnight allowance race over 1200 metres, humbling the highly thought of American colt RICHIESHAPPYNOTION (6-5, chased) who could only manage fourth in a field of seven.

Trained by DaCosta, HUPOMONE won by five lengths from the 33-1 outsider PALACE GUARD in the good time of 1:12.2.