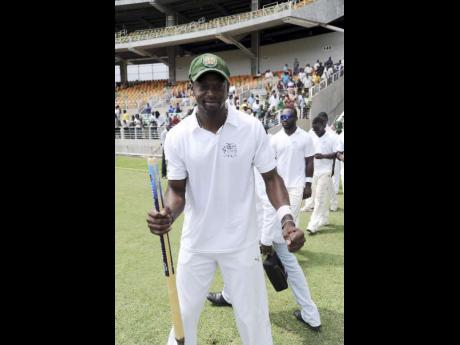 Kingston's captain Andrew Richardson is optimistic that his team can dig deep and get the required 47 runs needed to claim first-innings points over Melbourne in their top of the table Jamaica Cricket Association Senior Cup Zone D clash at Sabina Park.

Kingston, who, like Melbourne, are hunting points as they seek to secure a place in the quarter-final round of the championship, closed the day yesterday on 169 for five in reply to the visitors' 216.

Big-hitting former national Under-19 batsman, Garth Garvey, 48, and the in-form Chadwick Walton, 43, have so far top-scored for Kingston, while bowling for Melbourne another in-form player, Damion Jacobs, three for 37 has taken most wickets.

"We still have batsmen, both at the crease and to come, who are capable and if we show the required application I see no reason why we cannot win first innings, and look to push on and, if possible, force an outright result," said Richardson.

Melbourne, who began the day with 10 points, seven more than Kingston, who have a game in hand, were led to their modest total by Jacobs, who made 61 and Andre McCarthy, who contributed 44.

This was against Campion College's 15-year-old batting all-rounder, Abhijai Mansingh, who, bowling a variety of leg-spinners, claimed five for 57.

"We have a fairly inexperienced team, but so far we are putting up a fight and I believe we are in a good position to take at least first innings," said Melbourne captain, Damion Jacobs.