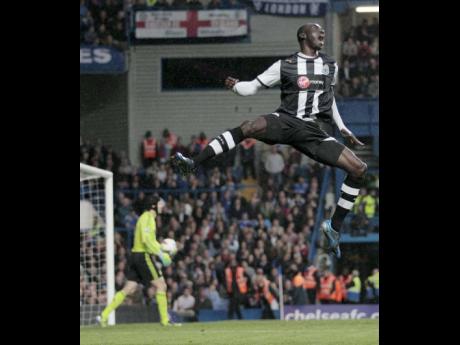 Football is known around the world as the beautiful game, and in many ways it is, especially whenever a player dribbles past an opposing player, or two, or three and whenever players move up the field delicately and precisely passing the ball from one to the other, slicing through the opposition's defence, and leaving the goalkeeper sprawling on the ground after a futile dive to prevent the ball from rippling the back of the net.

A season of football, a long, competitive season, has all this and more, and the British Premier Football season, stretching from August to May every year, has been no exception.

This past season, however, had one thing more than other seasons.

A season packed with high-priced professionals from all over the world playing top-class football, this past season ended with the most exciting finish I have ever seen, on television and otherwise, with two teams, Manchester United and Manchester City, battling for the title.

Part of the excitement was because they were both from the same city and because one had been regular winners and the defending champions and because one was normally mentioned among the 'also rans'.

The main reasons, however, were that after swapping the lead, the two teams entered the last round of matches on equal points, that City, after peppering United 6-1 early in the season, boasted a better goal difference, and that goal difference was the tiebreaker.

My bet was on City to win the title for the first time since 1968, and the reason for that was simple.

City had spent so much money on players, and while United were playing Sunderland in their final match, a team in the middle of the standings, City were up against Queen's Park Rangers, a team fighting to stay in the league.

On top of that, the tiebreaker was on City's side.

On May 13, two Sundays ago, City went 1-0 up, the City fans erupted as they had never done, as far as anyone can remember, and victory seemed only a matter of time.

It even seemed that way when QPR scored to make it 1-1. At that time some 30 minutes were left, the star-studded City were playing against a team fighting to stay in the league, and that team were playing with 10 men.

Suddenly, however, to the amazement of everyone, QPR were 2-1 in front with 24 minutes to go and instead of shouts of joy, the City fans were shedding tears of disappointment.

Two minutes into injury time, Edin Dzeko made it 2-2, and in the last minute of injury time, in the fifth minute and with 19 seconds to go, Sergio Aguero, Diego Maradona's son-in-law, made it 3-2 to send the City fans wild and celebrating into the night.

United who won their match 1-0 about five minutes earlier and who knew that City had to win the match in order to win the title, must have felt that they had retained the title when City were trailing going into injury time.

It was a great and grand climax to a season of excitement and drama, it was a mere 19 seconds between City and glory at the end, and it was great for football.

Apart from serving up a season to remember, the 2011-2012 season also served up some great goals, including the greatest goal that I have ever seen, on television or anywhere and in any competition, in schoolboy football or in World Cup football.

I have seen many goals scored throughout my time watching football, and I have seen the best of Pele, the best of Maradona, including the one that followed his meandering dribble, from the half-line, against England in the 1986 World Cup, the long, thundering kick from out in the distance by Marco van Basten in Euro 1988, and many others, such as some memorable free-kicks from Roberto Carlos and David Beckham, some unforgettable dribbles and darting runs by Rivaldo and Ronaldino, and some cheeky, almost nonchalant goals by Lionel Messi.

On Wednesday, May 2, however, I saw Senegal's Papiss Cisse scored a goal for Newcastle against Chelsea at Stamford Bridge, and it was a goal that I will never forget as long as I live.

Picking up the ball on the left-wing from a throw-in down by the half-way line, Cisse booted it with the outside of his right-foot, and the ball seemed to be heading outside until it swerved and headed towards the goal.

With Cech still stretching, almost hopefully, the ball passed over his head, and dropped inside the goal, in the top right corner.

Cech looked bemused, like he had seen a ghost, and everyone on the field, including Chelsea's left-back Ashley Cole, looked questioningly at each other as if they needed an explanation.

That goal was the talk of the football world for days. In fact, one night a few days later, during the NBA basketball matches on television, the commentators were talking about Cisse's goal when one of them said, in a conversation on the goal, "Well, I have been watching football for two weeks now and that is the greatest goal I have ever seen".

That goal, whether it was intended or not, whether the shot was speculative or not, is the greatest goal that I have ever seen, and I have been watching football for well over 50 years.