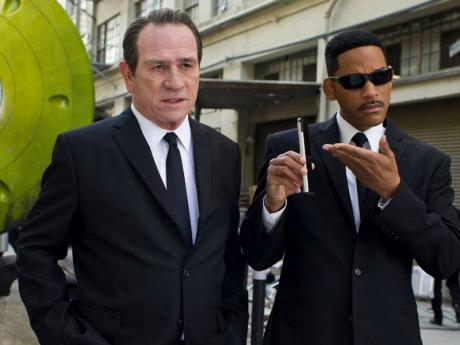 In this film image released by Sony Pictures, Tommy Lee Jones, (left), and Will Smith are shown in a scene from 'Men in Black 3'. - AP

The suits have knocked off the superheroes at the box office.

Will Smith and Tommy Lee Jones' sequel Men In Black 3 debuted as the No. 1 movie over the Memorial Day holiday weekend with US$55 million domestically from Friday to Sunday.

That bumps Disney's The Avengers into second place after three blockbuster weekends on top for the superhero sensation. The Avengers took in US$37 million over the three days to push its domestic total to US$514 million and become only the fourth movie ever to top half a billion dollars.

Distributor Sony estimates that by the end of the four-day holiday weekend, Men In Black 3 will have pulled in US$70 million domestically and US$202 million worldwide.

The Warner Bros horror tale Chernobyl Diaries opened at No. 5 with US$8 million.

Men In Black 3 launched with a bit more cash than its two predecessors, which both had opening weekends of just above US$50 million.

But the original Men In Black debuted in 1997 and Men In Black II premiered in 2002, when admission prices were much lower than today's. That means Men In Black 3 sold fewer tickets than the previous instalments.

Men In Black 3 reunites Smith's Agent J and Jones' Agent K as they battle a new alien menace that travels four decades back in time to do away with the younger Agent K (Josh Brolin).

Among the movie's box-office highlights overseas were debuts of US$19.5 million in China, US$18.9 million in Russia, US$8.5 million in South Korea and US$8 million in Japan.

Distributor Disney estimates that The Avengers will take in US$47.1 million for the four-day holiday weekend, lifting the film's domestic total to US$523.8 million. That will put The Avengers within US$10 million of The Dark Knight, the No. 3 movie on the all-time revenue chart with US$533.3 million domestically.

The Avengers will pass The Dark Knight in the coming week, leaving only two movies above it: Avatar at US$760.5 million and Titanic at US$658.5 million.

With US$26.3 million overseas, The Avengers raised its international total to US$781.6 million, and its worldwide revenues to just under US$1.3 billion. The Avengers will soon overtake Harry Potter and the Deathly Hallows: Part 2 at US$1.33 billion to become the No. 3 film on the global revenue list, again behind Avatar at US$2.8 billion and Titanic at US$2.2 billion.

Overall domestic receipts for the four-day Memorial Day weekend will come in well behind last year's record of US$276 million. Paul Dergarabedian, an analyst for box-office tracker Hollywood.com, estimated that four-day revenues this time will total US$195 million to US$200 million, about 30 per cent below Memorial Day weekend a year ago, when The Hangover Part II delivered a US$100 million-plus debut.

Hollywood remains on a record pace this year, with domestic revenue so far at US$4.24 billion, up 12.5 per cent over 2011 receipts, according to Hollywood.com.

But The Avengers and now Men In Black 3 have been the only notable successes for the summer season so far, with big releases such as Dark Shadows and Battleship fizzling on the domestic front.

"We really need to get going if we don't want to have to play catch-up every weekend through the summer," Dergarabedian said. "Some of these summer movies are just not doing the business people had hoped for in North America."