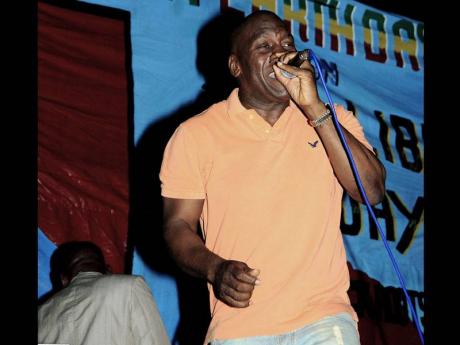 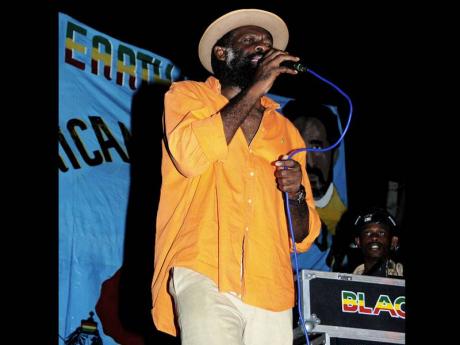 Jimmy Riley came to show his love for Sugar Minott during a birthday concert for the deceased singer on Friday night.
1
2

The party celebrating the life of the late Sugar Minott, one of dancehall's godfathers, brought many supporters of dancehall/reggae to his home in Kingston on Friday night as they paid tribute to the icon in performance and music.

Fire Links kept the vibe going by playing reggae songs such as Jah Cure's You Will Never and classic Sugar Minott singles.

Tarrus Riley's Beat Yuh had the patrons dancing the vibe heightened in an old-school dancehall atmosphere.

Sugar Minott T-shirts bearing the image of his face were also on sale, as well as CDs and DVDs of his last performance.

"I know Sugar Minott over 35 years. I grow up listening to him. As little youth, we look up to him. He is the godfather of dancehall. Him look out fi all youth from him si seh yu have potential. Suh mi haffi rate him as the godfather. A him seh Youthman Promotion," Jim Nastic said.

Another protegé of Sugar Minott, Buckey Ranks, shared that Sugar Minott gave him direction in his musical career.

"Sugar Minott carry mi all over the world pon tour with Youthman Promotions in the '90s. We went all over Europe - me, Daddy Ants, Daddy Shark and Daddy Freddy. Sugar Minott teach us a lot of things. He was a good performer, good writer. The week before him drop out, mi put out an album and he wasn't on it and he was saying I should have included him, and up until now, I'm still unhappy that he wasn't able to get on my album," Bucky Ranks said.

Sugar Minott's daughter, Passion Minott, told The Gleaner that May 25 would be celebrated as Sugar Minott's day annually. She also emphasised that there was need for corporate support.

"This is the second staging of the event. We did it in Brooklyn last year and it was very good. Shinehead, Yami Bolo ... all the New York-based artistes came out. We trying to go different places with it. I love the turnout and I'm happy to see people love my daddy. Youthman Promotions, we have new talents working on. We have the Fast Cash rhythm coming out this year featuring myself, Daniel Minott, Andrew Minott and others."

She continued, "Our intention is to establish the brand and carry on our father's brand in any way we can. We have the clothing line, Passion Minott Designs; the record label has been revived; the show 'Reggae in the Hills' will make a return; and, hopefully, in 10 years' time, the new generation will know who Sugar Minott is. So we are putting in enough work to accomplish that goal. We are looking support from sponsors.

"Sugar Minott Day is going to be an annual event and, hopefully, next year more people will be on-board. Give thanks to everybody for the support - all the entertainers. We are blessed and we give thanks."

The night of clean dancehall/reggae entertainment concluded with performances from George Nooks, Nitty Kutchie, Ken Boothe, Beenie Man, Turbulence, Eddie Fitzroy and Sugar Minott's youngest son, Geovani Minott, among a slew of other musical veterans who came out to show their support.