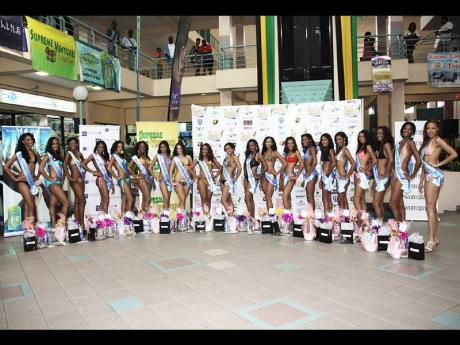 The top 20 MJW ladies sashed and with gifts from sponsors. photo by Garfene Grandison

Ahead of the June 23rd Miss Jamaica World (MJW) Coronation show, the top-20 finalists have a series of events that they have to participate in before one is chosen as MJW 2012. One such event is the sashing and public parade, which took place at the Sovereign Centre on Saturday.

Commencing a few minutes after the announced 1 p.m. start time, each of the top-20 finalists started the day's festivities by parading in the trendy ensembles provided by Teen Bling. The audience was very receptive to the females as they did their opening walk.

The venue was packed and the sweat streamed down the faces of patrons, but it didn't stop the cheering. Screams, cheers, noise makers, you name it, were used to show some love and support towards each female. After the opening parade, MCs Michael Anthony Cuffe Jr, and Regina Beavers treated the members of the audience to trivia giveaways courtesy of the pageant's sponsors such as Neutrogena, Soft-sheen Carson and Venus Embrace.

The giveaways added even more excitement to the parade as patrons were totally immersed in the activity, which allowed the females time to change into their swimwear for the highly anticipated swimsuit segment.

One by one, they made their way down from the third storey, smiling and greeting their supporters, donning swimsuits courtesy of The Mushroom.

At the end of the sashing, each girl represented the following sponsors:

Each of the 20 finalists was presented with gifts from some of the show's sponsors such as SoftSheen-Carson, Maybelline, Venue Embrace, Neutrogena, Listerine, and Teen Bling.