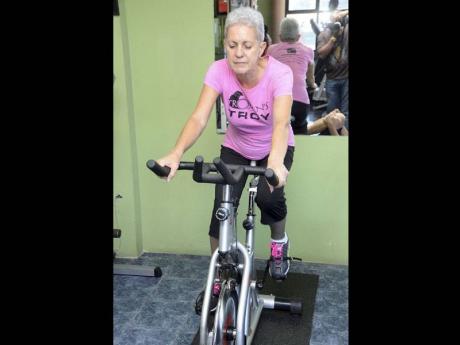 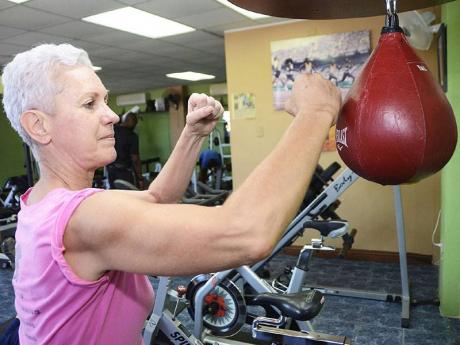 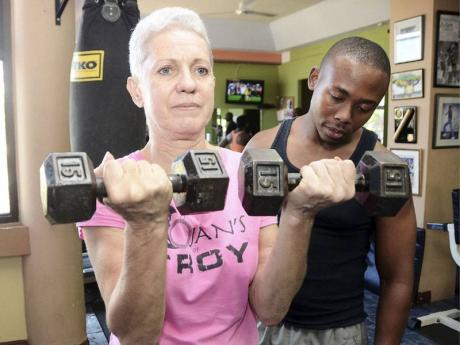 MS can affect the brain and the spinal cord and carries a multiplicity of symptoms. These include muscle weakness, decreased coordination, blurred or hazy vision, eye pain and double vision. Later symptoms include muscle stiffness, pain, difficulty controlling urination, or problems with cognition, according to the medical website WEBMD.com.

The 62-year-old, called Fran by her friends, has been able to push past many of the physical restrictions created by MS with the help of regular exercise.

At one point, Fran could not walk comfortably, now she is working out!.

"I could drive, but I wasn't walking very well. My hips were tight, I had no muscle tone. I was using a stick and my balance was awful," Bravo explained.

She began attending the gym three and a half years ago when she drove her husband to Cuthbert's Fitness Studio. It was a part of his recovery after he broke his leg.

"I started coming religiously ever since. I started training with Troy, sending him a whole lot of articles on MS," she said.

Since then, she can walk unassisted. Her balance and overall physical health have also improved.

"We mix it up, always rotating. We do a little boxing; every now and then we do circuit training, lightweight high repetitions; sometimes it's heavy weights and low repetitions," explains her personal trainer, Troy Hudson, about his client's routine.

Bravo trains with Hudson three days per week for an hour to an hour and a half. Aware of her limitations, which included her inability to run, Hudson emphasised that he ensures she doesn't become overheated, so he is always there during her exercises to ensure her safety.

For Bravo, the first symptoms of the disease came in her late 30s.

"It started with strange tingling feelings.The next step was weakness in my legs. I couldn't lift my legs up and then that sort of passed, because that's the nature of the illness," Bravo notes, explaining the tendency of the disease to have periods of remission. She never experienced any vision problems. She was not diagnosed with MS until years later after being examined by a neurosurgeon who operated out of Florida.

"At the time, there was no medication available. There was in Europe, but we didn't know about that. In North America, there was nothing available," she said.

"I just went on. I was a flight attendant for 25 years and I just continued flying for about 10 years after the initial symptoms. Eventually, I had a very bad relapse and literally couldn't walk, lying in bed for a few weeks," she said.

Bravo returned to Florida where her neurosurgeon put her on intravenous steroids for a few days which helped tremendously.

"I crawled into the hospital and I basically walked out. Then just at that time, the medication I'm now on became FDA approved in North America and he started me on that," said Bravo of the medication Betaferon.

Her doctor is impressed by her health. "He thinks I'm the poster child for MS. He thinks I'm doing great!" she said with confidence.

Bravo maintains a healthy diet and stretches after exercising, which keeps her joints limber.

"I've always had a good diet, lots of fruits and vegetables. More vegetarian than not, I do eat meat from time to time, but I can live without it." Her trainer concurs that her diet has allowed her to see great results from exercise.

"MS is a progressive disease, so regardless of what you do, even with the medication there is some slight progression; but after 25 years, I'm really doing very well," said Bravo, who keeps busy with charity clubs such as the International Proxy Parents and the Woman's Club.