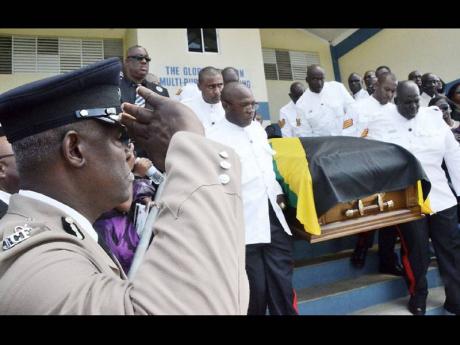 Minister of National Security Peter Bunting yesterday urged policemen and women to pay tribute to their late colleague, Senior Superintendent of Police Dathan Henry, by attempting to walk in his footsteps.

"I would say that perhaps your tribute in action would be to emulate SSP Henry and redouble your efforts to prevent crime and secure the gains he has made, particularly in Clarendon where we've seen a tremendous reduction in crime," Bunting said.

He was speaking during a thanksgiving service held yesterday at the Gloria Johnson multi-purpose building at the Moneague College in St Ann.

Henry died on May 6 after a brief illness. He was in charge of the Clarendon Police Division at the time of his death and served the Jamaica Constabulary Force for 27 years.

His sister, Debbie, recalls that he was nicknamed 'Ruffy' by his father because of his physique, strength and alertness as a youngster.

She spoke glowingly of her departed brother saying: "His contagious smile illuminated the lives of everyone who came in contact with him."

"He was a philanthropist, a people person, an adviser, problem solver, breadwinner; a strong disciplinarian; his favourite words were: 'Whatever is at your disposal, make the best of it'," Debbie added.

Custos of Clarendon William 'Billy' Shagoury said Henry won the trust of the Clarendon people as a crime fighter.

"The citizens started to open up to him and even more and more, they gave him information. They knew that his word was his bond. His men, too, were devoted to him. They would go to the ends of the earth for him because he was constant, a steadfast leader and a motivator that could always be depended on."

In the meantime, Bunting has underscored the need for the state to promptly pay over benefits to the dependants of police officers.

"We can pay tributes in words but we can also pay tributes in action and I think one of the tributes that we can pay in action not just to, and this is by the Ministry of National Security, not just to SSP Henry but all the men and women of the security forces, is to ensure that the welfare benefits that they earn are paid promptly to their beneficiaries," Bunting said.

"And that is why we have commissioned former Commissioner of Police Lucius Thomas to join us at the ministry and ensure that we pay tribute in action in ensuring that these and other benefits are paid promptly," Bunting added.

Henry's body was interred in the Faith's Pen Cemetery.