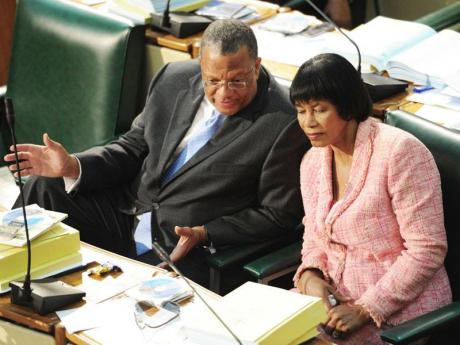 Finance Minister Peter Phillips has the ear of Prime Minister Portia Simpson Miller as he prepares to table the Budget for the 2012-13 fiscal year last Thursday. - Ricardo Makyn/Staff Photographer

"The traditional ways of balancing the books have been through increasing taxes and reducing expenditure. But in times of economic challenge, such as the country currently faces, this approach is disastrous."

We hope, for Jamaica's sake, that these words do not come back to haunt Simpson Miller. When she made the statement, she was leader of the opposition. Today, she is prime minister, and her finance minister, Dr Peter Phillips, has done the very same thing she frowned upon two years ago. He is seeking to cure the maladies in the economy by the traditional ways of increasing taxes and reducing expenditure.

The national budget has been reduced in real terms, meaning less money is available for spending on programmes, and Phillips, in one go, has sought to extract $19.3 billion in taxes from the economy.

The actions of this new Government go against its opposition speak, when it consistently argued that the state play a greater role in the economy by stimulating aggregate demand though increased government spending. That position has been abandoned since December 30, the day after the general election.

For The Gavel, the credibility of the People's National Party (PNP) administration is slipping very fast.

We empathise with Phillips, for his job of rescuing this sinking ship cannot be easy. The country's public debt stock stands at J$1.7 trillion, Jamaica has a credibility problem with the IMF, other multilaterals and well as the capital market, and the prospects for growth seem slim. The Government clearly inherited a mashed up country. The IMF agreement fizzled because of poor economic management, the debt grew to unsustainable levels, and Jamaica's public finances were just untenable.

There are no two ways about it, the tax axe had to fall; we have no contention with that, our issue is that there is little consideration in the Budget for working-class, poor and marginalised Jamaicans.

The tax package, which includes an inexplicable reduction in corporate income tax from 33.3 per cent to 25 per cent, flies in the face of Simpson Miller's rebuke of the last Government. While speaking at a campaign meeting in Mandeville, Manchester, last year, Simpson Miller said the administration lacked compassion.

"Fiscal targets cannot eat and people cannot sleep on balance sheet," Simpson Miller said, before going on to promise that a government led by her would balance the books while balancing people's lives.

It is not that private-sector leaders have hailed Peter's budget as a very good attempt at taxation. The Gavel, however, cannot join that party. We see no justifiable reason for the massive reduction in corporate income tax. In fact, we believe that if the Government is to offer such give-back to the private sector, then it should be a performance incentive. For example, recognising that Jamaican firms hardly invest heavily in research and development, thus denying theproductivity edge, it would have been laudable if Phillips placed a reasonable benchmark on this item in order for firms to qualify.

Similarly, tax reduction for businesses should have been pegged to the creation of new jobs as well as the greater use of renewable energy. What Phillips has done is to reward inefficiency, solely on the basis of the economy being bad.

And there are other credibility issues facing the administration. Let us recall Simpson Miller's opposition reacted with great hue and cry to Shaw's announcement in 2009 that text books and computers would be subjected to general consumption tax (GCT). "I know that you agree with us that GCT on computers and books is not progressive," Simpson Miller said in the Budget Debate that year.

The Hansard record of Parliament recalls the no-nonsense mood Simpson Miller was in then.

Mrs Simpson Miller: Put simply, it is a huge mistake.

Mrs Simpson Miller: ... this move is like placing a tax on literacy ...

Mrs Simpson Miller: it must be repealed. (applause) Mr Speaker, how can any government tax literacy.

Mrs Simpson Miller: if you think education is expensive, consider the cost of illiteracy. (crosstalk)

Mrs Simpson Miller: Mr Speaker, in a knowledge-based world, how can you tax knowledge?

Mrs Neita-Headley: How can you? How come?

Mrs Simpson Miller: How can you tax the opportunity for an individual to create his or her own job?

Mrs Simpson Miller: Mr Speaker, the tax on computers and on books sends only one message to the youth of Jamaica and their families. That message is, access denied, progress delayed. (applause)

Simpson Miller was similarly strident as she promised on the campaign trail that the administration would remove GCT from electricity. A media release issued by the PNP clearly communicated the intent of the government.

Read the release: "A future government led by the People's National Party will remove the general consumption tax on electricity and a range of basic food items in an effort to reduce the burden of high costs being experienced by the productive sector as well as consumers, PNP President Portia Simpson Miller has pledged.

Mrs Simpson Miller said removing the GCT on electricity would assist burdened households and provide an incentive for the productive sector, including manufacturers and other businesses now finding it difficult to cope with the high electricity bills. The PNP president added that a new government led by her would also review the issue of reconnection fees charged by power generator and distributor, Jamaica Public Service Company."

And on every campaign stop she made thereafter, Simpson Miller repeated the promise and criticised those who raised doubts about the government's ability to deliver on that commitment.

Phillips, on Friday, said: "During the election campaign, we would not have a sense of how dire the public finances of the country were at the time". We would rather if he left it there. Instead, he has attempted an unforgivable sin of sophistry. According to Phillips, by raising the threshold from 200kWh per month to 300 kWh on electricity consumption above which GCT is charged, the Government has fulfilled its commitment to relieve consumers of high energy cost. We maintain that was not the promise and Phillips needed to have acknowledge that fact.

Like Phillips, we believe in the goodwill of Jamaicans. We believe that once we are frank in speaking to them they will understand. But Jamaicans hate three-card tricks.

While Phillips has stressed that the government has done its best to cushion the blow to the most vulnerable among us and to deliver a fair budget, we remain convinced that the PNP's pre-election rhetoric of putting the people at the centre of its policies is not matched by this pro-corporate Jamaica budget.

We also view Phillips' call for greater parliamentary involvement in the budgetary process as another empty rhetoric. This is a call he consistently made in opposition, and it was a commitment in the progressive agenda of the party to ensure the tax committee of parliament review revenue measures and consider tax policy.

In opposition, Phillips said it was wrong for a finance minister to merely turn up in Parliament, announce tax measures and those measures take effect without Parliament having a say in the matter.

But despite being in government for five months, a tax committee has not been appointed, Phillips has imposed one of the heaviest tax packages ever on the people, and parliamentarians, whether they like it or not, will just have to suck that up.