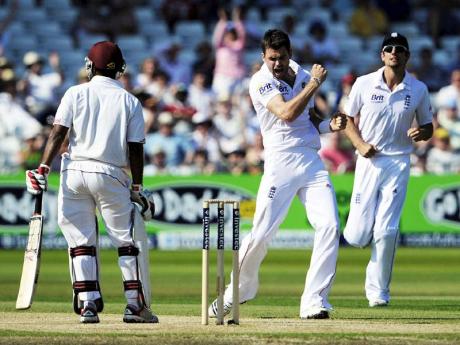 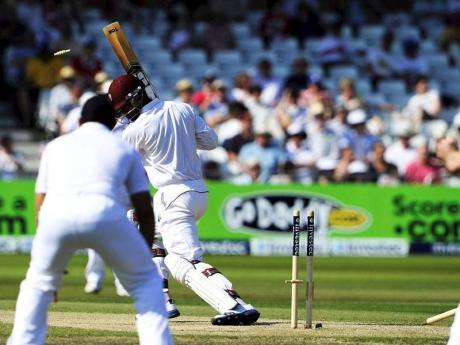 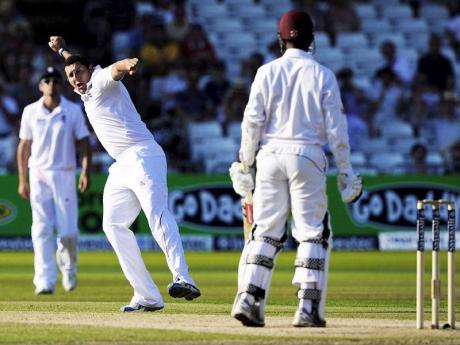 A strife-torn final session on yesterday's third day left West Indies yet again in shambles and with little or no hope of saving the second Test against England at Trent Bridge.

At the close, the Windies were tottering precariously on 61 for six - an overall lead of just three runs - after seamers Tim Bresnan (3-10) and Jimmy Anderson (2-12) laid waste to their top order in torrid spells that put England on the brink of a winning 2-0 series lead.

Only Marlon Samuels, unbeaten on 13, has shown any resistance and will need another record stand with captain Darren Sammy, who is yet to face a ball, if the Windies are to avoid a heavy defeat.

Earlier, West Indies conceded a deficit of 58 runs on first innings after they produced an outstanding bowling effort to restrict England to 428 all out on the stroke of tea.

Speedster Kemar Roach took two of the four wickets to fall in the morning session to finish with two for 90, while part-time off-spinner Samuels (2-14) and medium pacer Sammy (2-120) also finished with two wickets apiece.

Fast bowler Ravi Rampaul was the best bowler with three for 75.

Captain Andrew Strauss carried his unbeaten 102 overnight to 141, while Kevin Pietersen fell for 80 after resuming the day imperiously perched on 72.

Any hopes West Indies had of building on the momentum set by their bowlers perished inside the first 20 minutes when both openers were dislodged by swing bowler Jimmy Anderson, with just 14 on the board.

Left-handed Kieran Powell lasted just four balls before he was bowled leg-stump for one, essaying an expansive drive at the first delivery he received from Anderson and playing on with the score on five in the third over.

Adrian Barath followed soon afterwards, tucked up on the crease and fell lbw for seven in the fifth over of the innings.

The prolific Shiv Chanderpaul again looked in fine touch as he stroked two boundaries in 11 off 15 balls and together with the stylish Darren Bravo, who hit 22, looked to be restoring order to the innings.

However, England got the prized wicket of Chanderpaul at 31 for three when the veteran left-hander played an uncharacteristic loose pull stroke at a short ball from seamer Stuart Broad to give Jonathan Trott a regulation catch at long leg.

The left-handed Bravo's four boundaries, included two superb strokes - a delightful drive through point and equally charming push through mid-on, both off Broad - in an innings that lasted 43 balls in just over an hour at the crease.

His innings ended tamely, trapped lbw on the back foot to Bresnan, with his recourse to the DRS proving futile.

Denesh Ramdin's dismal career in front the stumps continued when Bresnan accounted for him for six via the lbw route, nine minutes before the close, to leave West Indies further in the mire at 61 for five.

Kirk Edwards, who spent most of the day at his hotel fighting the flu, arrived to lend his hand to the battle, but Bresnan also trapped him plumb lbw without scoring to extend the right-hander's rut of eight runs from four Test innings on tour.

The dismal showing by Windies' batsmen undermined the good work by their bowlers to limit England after the hosts resumed the day on 259 for two and were in a prime position to pile up a big score.

Roach, plagued by no-ball problems on Saturday, responded with a pacy, devastating seven-over spell that cost 23 runs and yielded the wickets of Ian Bell (22) and Jonny Bairstow (four).

West Indies claimed Pietersen in the third over of the morning, lbw to one from Rampaul that a subsequent review showed was clipping leg-stump.

Bell put on 33 for the fourth wicket with Strauss before also falling lbw on review, after the initial appeal was turned down by umpire Aleem Dar.

Roach then shook up rookie batsman Bairstow with a couple of short balls and the pressure eventually told on the right-hander as he scooped one tamely to mid-on, 40 minutes before lunch.

Sammy bowled Matt Prior middle stump for 16 at 336 for six minutes before the break and also claimed Strauss caught behind on resumption, after the left-hander faced 303 balls in seven hours and 12 minutes and struck 22 fours.

The Windies were then held up by a nagging 53-run, eighth-wicket stand between Bresnan (39 not out) and Broad (25) before Broad attempted a paddle sweep at off-spinner Shane Shillingford and lobbed a catch to Sammy running around from slip, 11 minutes before the scheduled tea break.

Samuels then picked up the last two wickets, having Graeme Swann caught at slip for one on review and Anderson lbw without scoring.