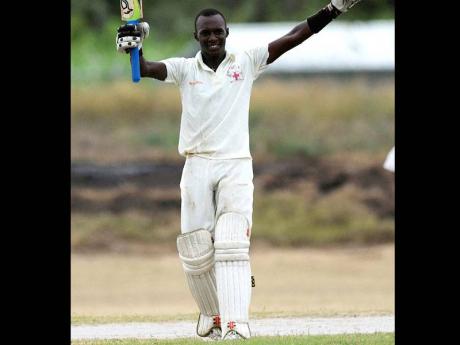 West Indies Cricket Board (WICB)/Sagicor High Performance Centre (HPC) invitee, Jermaine Blackwood, made 118 and claimed five for 41 to guide Hanover to an innings-and-75-runs win over St James on Saturday and into the quarter-finals of the Jamaica Cricket Association Senior Cup.

The game, which was played at Green Pond High, saw Blackwood slamming eight sixes and seven fours as his team posted 261 for nine declared in their first innings, after being asked to take first strike.

St James, in reply, were bowled out for 86 and 100, with Blackwood, who, along with fast bowlers Sheldon Cotterell and Jason Dawes, are the three Jamaicans selected for the HPC, doing most of the damage with his part-time off-spin in the second innings.

Nkrumah Bonner, who graduated from the HPC last year, made 36 and grabbed three for 23 to help St Catherine CA record an eight-wicket win over Kingston and St Andrew, also on Saturday, in their match-up at Maxfield Park.

Batting first, Kingston and St Andrew were dismissed for 107, with Akeeno Gayle claiming eight for 39. St Catherine CA, who are in with a chance of making it to the quarter-finals, were then blown away for 74, with Bonner top-scoring as Renar Ross took six for 33.

Determined to record an outright win, St Catherine CA fought back through Gayle, who took seven for 32 to dismiss the hosts for 65. Batting a second time, St Catherine then cruised to 102 for two with Amanja Morris getting 35 and Bonner 24.

Elsewhere, resolute batting from fast bowler Andrew Richardson resulted in Kingston claiming first-innings points over Melbourne in one of the round's feature matches when play ended yesterday at Sabina Park.

Resuming on 169 for six and needing another 48 runs to surpass Melbourne's first-innings total of 216 to claim first-innings points Richardson made 32 not out to guide his team to 229.

This was despite the efforts of the in-form leg-spinner, Damion Jacobs, who finished with seven for 51.

Melbourne, batting a second time, declared their second innings at 185 for nine on the stroke of tea, with the hope of trying to force an outright result. However, in the end, Kingston held firm, closing the day on 101 for five.

John Ross Campbell, with 50 off 28 balls - including four sixes and five fours - top-scored in Melbourne's second innings against left-arm spinner Paul Harrison, who took four for 68.