Simoya Campbell - a diamond in the rough 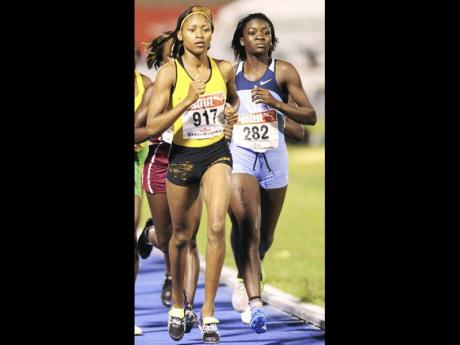 Simoya Campbell leads Edwin Allen's Desreen Montaque and the rest of the field on her way to winning the girls' 800 metres final at Champs. - Ricardo Makyn/Staff Photographer 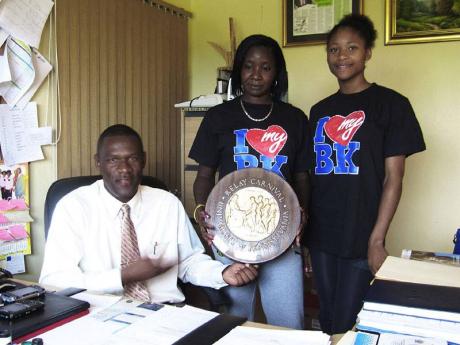 Semoya Campbell (right) with coach Megan Wilson-Copeland and George Henry, principal of Spalding High School. Wilson-Copeland holds the school's first trophy from the Penn Relays, earned for their participation in the Championship of Americas 4x800m, in which they placed fourth. - Contributed
1
2

It is no secret that Jamaicans love to run fast. Rarely can one be found who loves to run long. They are like cheetahs, not camels.

Therefore, when a youngster comes along who has the talent and urge to run the longer distances, track fans immediately begin to salivate. In the recent past, we have seen the emergence of Kemoy Campbell and Natoya Goule. However, few, if any, have been able to excite like diamond in the rough Simoya Campbell of Spalding High School.

The sleek and smooth runner, who hails from the same hills which run between Trelawny and St Ann that produced the Turner sisters - Inez, Janice and Yvette - broke on to the scene a couple of years ago after toiling for years trying to be the next Shelly-Ann Fraser. Good sense prevailed when her new coach, Megan Wilson-Copeland, saw that this girl could fly if given the right length of ground from which to take off.

"I looked at her and saw the body structure is not that of a sprinter. We made the change and the rest is history," declared young coach, Wilson-Copeland.

"It is easy coaching her. She follows instructions re her running and training. Very talented and dedicated and the results have improved every year," she added.

This season, Campbell has been spectacular, 2:03 over 800m and 4:32 over 1500m, winning both events at Girls' Champs and the Carifta Games in Bermuda.

Apart from the Carifta Games trials, where she was pushed by the equally talented Desreen Montaque of Edwin Allen, Campbell won every single race with consummate ease. It boggles the mind what she could do in a tough and competitive training atmosphere.

"Training has been very hectic," Campbell offered on Friday. "I did something at the World Youth (Championships) last year, and I don't intend to go and do it again. I am using every mistake I make to motivate me so that I can go to the World Juniors and make my country proud."

The Burger King-assisted athlete said she went out too fast and couldn't find the energy to complete an effective second lap in the 800 metres.

"The first 200m was too fast," she lamented. "I tried to make up for it but couldn't. Now, we are doing enough work so that I will be able to carry a good pace all the way.

"All of us have two feet, so I have been told," she quipped, after being reminded of the strength of the Africans. "I am never afraid of anyone."

Campbell, who ran with the senior women at the recent JN Jamaica International Invitational, said that the experience was rewarding.

"Running with the women at that meet was great," she said. "It was a very good experience. It taught me that I should not give up."

She said the older runners were very kind to her.

"They congratulated me and told me to continue running the 1500m as it will help me get stronger in the 800m. I was very proud of myself. It was so different. I knew they have more experience so I decided to run my own race."

Though winning all her individual races against her peers with ease, Campbell has not been able to repeat the 2:03 done in early March.

"Maybe the reason I have not been able to go that fast is the work that I am now doing," she admitted. "I plan to run that time at the trials (National Championships) though."

Campbell admitted that she had to move away from the wrong crowd to achieve her goal.

"I was a hot girl who never thought about running. I did not train hard and didn't expect much. Now, it is so different," she reasoned. "Representing Spalding High is a dream come true for me. This is the school that I have always wanted to come to, and to be the only girl to go to Champs and bring back a medal in the history of the school, that makes me feel really good."

She hopes to do well at the international level.

"There are not many athletes from Jamaica doing well at these distances and I want the world to know that we can do much more than the sprints."

Campbell says that Wilson-Copeland, who looks not a day older than Campbell, "is like a mother, a sister and a friend all in one. Always pushing me to do well."

Spalding's principal, George Henry, sums up the experience quite well.

"Semoya is the best thing to ever happen to this school. Being the only girl ever to win a gold medal at Champs makes her a pearl among the other students. I am not surprised that she has achieved so much as she works really hard, both inside and outside the classroom," he said, beaming.

"I am convinced that in no time, she will be a star on the world scene. She has put in a lot and we expect her to do well in her exams, which she is currently doing."

The team will get together after the results of the CXC's are published to determine in which direction the budding star will go. It won't be long before Kenia Sinclair and Goule get good company. After all, it's much easier to hunt in a pack.