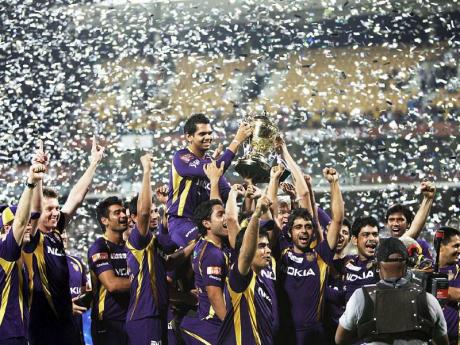 The right-armer, voted Man-of-the-Series for his 24 wickets at an economy rate of 5.47, sent down four overs for a costly 37 runs as Chennai tallied an extremely competitive 190 for three after opting to bat first at the MA Chidambaram Stadium.

Suresh Raina smashed a top score of 73 off 38 balls with three fours and five sixes, while Australian opener Mike Hussey got 54 from 43 balls with four fours two sixes.

Hussey and Murali Vijay (42) put on 87 for the first wicket off 62 balls, before the left-handed Raina added another 73 for the second wicket with Hussey.

Raina was dismissed off the last ball of the innings, caught in the deep of left-arm spinner Shakib Al Hasan.

In their turn at the crease, KKR were propelled by a whirlwind 89 from opener Manvinder Bisla and 69 from South African all-rounder Jacques Kallis.

The pair added a hasty 136 for the second wicket after Gautam Gambhir fell for two, bowled by Australian seamer Ben Hilfenhaus off the last ball of the first over with the score on three.

Bisla hit eight fours and five sixes off 48 balls, while Kallis counted seven fours and a six off 49 balls.

Both batsmen fell as KKR lost four wickets for 36 runs off 25 balls, leaving the game in the balance.

Needing nine for victory off the last over bowled by Bravo, Manoj Tiwary (nine not out) swatted the third and fourth deliveries from the West Indies all-rounder through square leg for boundaries to seal victory.