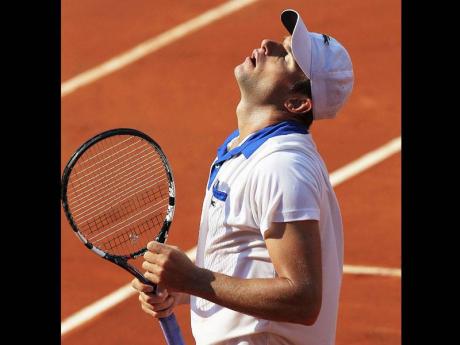 Andy Roddick of the United States throws his head back after missing a shot in his first round match against Nicolas Mahut of France at the French Open tennis tournament in Roland Garros stadium in Paris, yesterday. Roddick lost to Mahut in four sets 6-3, 6-3, 4-6, 6-2. - AP

Easy to understand why Andy Roddick never enjoyed playing on red clay all that much.

First and foremost, the footing is tricky as can be. The soft courts take his booming serves and forehands down a notch, too. Put simply, his game is built for hard or grass courts.

As if that weren't enough, he arrived at this French Open having played only 16 matches in a season interrupted by injuries to his right hamstring and right ankle.

If Roddick was tempted to sit out Roland Garros altogether - or tempted to use his health or rust as an excuse for playing poorly - he did not. The 26th-seeded American, once ranked No. 1 and once a Grand Slam champion, gave it a shot and came up short yesterday, exiting in a major tournament's opening round for the first time since 2007, and at the same venue.

His 6-3, 6-3, 4-6, 6-2 loss to 88th-ranked Nicolas Mahut at the French Open dropped Roddick's record to 7-10 this season, 0-4 on clay. Of the seven previous major title winners in action on Day 1 in Paris, including Venus Williams in her first Grand Slam match since revealing in August she was diagnosed with an autoimmune disease, only Roddick was beaten.

"Wasn't playing really well. I move just horrendously out here. My first step is just so bad on this stuff," Roddick said. "I feel like I'm always shuffling or hopping or not stopping or something."

Like Roddick, and for much the same reasons, Williams is not nearly as comfortable on clay as faster surfaces.

She's also dealing with the difficult process of learning to live with Sjogren's syndrome, a condition that can cause fatigue and joint pain. But the 31-year-old Williams, a seven-time major champion, overcame a slow start yesterday to beat 19-year-old Paula Ormaechea of Argentina 4-6, 6-1, 6-3.

"A lot of it, I have to figure it out. It's physical and emotional and all kinds of different things. Mental," Williams said of her medical condition. "It's a big accomplishment for me to be here right now."

She looked glum on court, not even smiling after most of her 41 winners (Ormaechea only had 15). But she laughed frequently during her news conference, such as when she talked about what she's been going through as "definitely an adventure and journey; it's life happening"

Mahut hit more aces than Roddick, 13-8, and broke him seven times, including in the last game on Court Suzanne Lenglen, an arena the American is not fond of.

Roddick only once made it as far as the fourth round in 10 trips to Roland Garros, in 2009. He's lost in the first round five times now. And there's a reason the guy never saw success at the French Open the way he did at the US Open (champion), Wimbledon (runner-up three times) or Australian Open (semi-finalist four times).