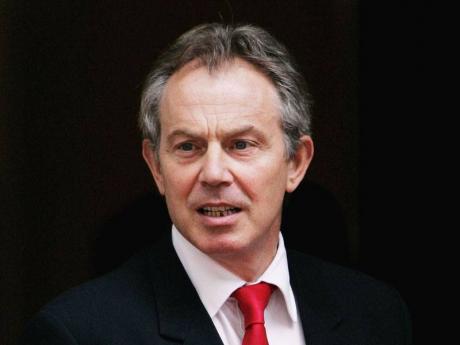 Former Prime Minister Tony Blair said Monday that he couldn't stand up to Britain's media tycoons while in power, telling an official ethics inquiry that doing so could have dragged his administration into a political quagmire.

Blair's testimony, briefly interrupted by a heckler who burst into the courtroom to call him a war criminal, shed light on the canny media strategy used to create the 'New Labour' image that repackaged his party as more mainstream and business friendly, bringing it back to power after 18 years in opposition.

Blair, who was premier from 1997 to 2007, enjoyed strong press support in his early years, including backing from media mogul Rupert Murdoch's influential newspapers. But he found himself isolated near the end of his decade in power due, in large part, to his unpopular decision to join the US-led invasion of Iraq.

The ex-prime minister said he long had concerns about what he once described as the "feral beasts" of the media but had to tread carefully where press barons were concerned.

"I took a strategic decision to manage these people, not confront them," he told Lord Justice Brian Leveson, who is leading the inquiry. "I didn't say that I feared them ... (but) had you decided to confront them, everything would have been pushed to the side. It would have been a huge battle with no guarantee of winning."

Leveson's inquiry was set up following revelations of phone hacking at Murdoch's News of the World tabloid, a scandal which has rocked the British establishment and raised questions about whether top politicians helped shield Murdoch - and the media in general - from official scrutiny.

Blair's time at the top has come under particular scrutiny because of the mutually beneficial alliance the media-savvy prime minister forged between his left-wing Labour Party and Murdoch's News Corp, a company whose holdings include the populist The Sun newspaper and the right-wing Fox News network.

Blair became so friendly with Murdoch that he was chosen to be the godfather to one of Murdoch's children. The Blair government's relationship with Murdoch has since been described by several former colleagues as having been too close for comfort.

The former prime minister made no apologies for courting Murdoch, saying he was just one of several media tycoons who could make life difficult if they weren't happy with a position he was taking.

He denied doing any kind of deal with Murdoch - "either express or implied" - although he acknowledged calling the Australian-American tycoon ahead of elections to make sure that Labour could count on News Corp's support.

Blair's testimony was interrupted when a heckler burst in through a secure corridor behind Leveson, shouting: "This man should be arrested for war crimes!" before being removed by security. British media reported that the heckler, who identified himself as filmmaker David Lawley Wakelin, had previously heckled Blair over the 2003 invasion of Iraq at a televised question and answer session.

Such incidents - a testament to the divisiveness of Blair's decision to go to war in Iraq - are routine. Last week, a handful of protesters yelling out "warmonger" interrupted his speech at Colby College in Maine.

Blair, wearing a navy suit and sporting a tan, watched impassively. Leveson said he would investigate how the man managed to sneak in to the restricted area.

Wakelin - who was released without charge - later told London radio that he took advantage of an unguarded door in the maze-like Royal Courts of Justice, where the inquiry is being held.

Blair spent a considerable amount of time challenging the reputation his lieutenants built up for bullying, manipulation, and "spin" in his decade in office.

Still, he acknowledged that politics and media had become "far more rude and brutal - and in a sense crude - in its interaction."

Blair's appearance kicked off an important week at the judge-led inquiry. Current ministers, including Culture Secretary Jeremy Hunt, Education Minister Michael Gove and Home Secretary Theresa May, are due to testify in the coming days.

Prime Minister David Cameron is also expected to testify before Leveson, whose inquiry was set up last year after it emerged that reporters at the Murdoch-owned News of the World tabloid had routinely hacked into the phones of public figures and crime victims.

The scandal has rocked Britain's establishment, leading to the arrest or resignation of dozens of journalists, media executives, political operatives and police, prison and military officials. It's also exposed a pattern of wrongdoing across the British press, from bribery to blackmail.

The investigation continues. As Blair was testifying, police said they'd arrested a 42-year-old woman on suspicion of money laundering offences linked to the hacking scandal.