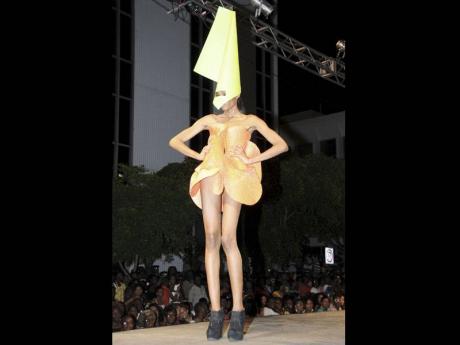 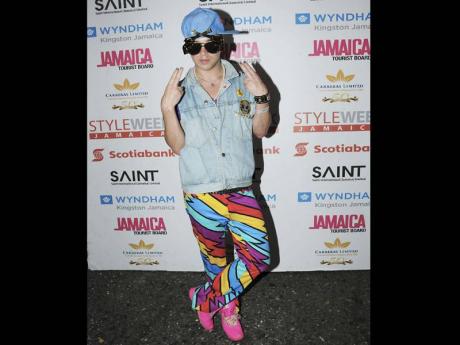 Designer Indashio was the life of the party in his psychedelic attire. - photos by Winston Sill/Freelance Photographer 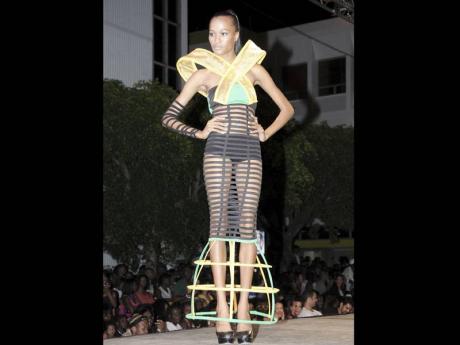 This piece from Cecilia Davina's , 'A Wah So Strings' collection was an eye-catcher. 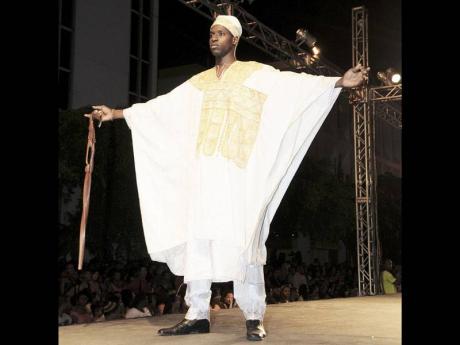 Like a king of some sort, this model showed off a piece from a collection called 'Shades of Africa' .
1
2
3
4

Endless jumping on stage brought a close to Saint International's StyleWeek with Fashion Block on Knutsford Boulevard in New Kingston on Sunday evening.

After showing numerous collections throughout the night, the production crew, models and designers took to the runway with lots of jumping and fist pumping right after Donna Rose thrilled patrons with Jamaica 50-inspired pieces. They danced and greeted each other as the selector played a high-tempo version of Adele's Set Fire To The Rain.

But the number of persons present when the show came to a close at almost 1 a.m. was a far cry from the droves of people who literally blocked Knutsford Boulevard earlier in the evening when the show began.

Scheduled to start at 9 p.m., the show got under way half an hour later than planned with dancers representing Courts getting the crowd in high spirits with their dance moves. Kicking off the fashion show was Kevin O'Brian's dramatic dresses and head pieces. He utilised a lot of lace and satin but also included ruffles. There was also a white dress that had a big '50' at the front, paying homage to Jamaica's jubilee.

Following O'Brian were designs from Shades of Africa and Balla Shawn. But it was Cecilia Davina who brought some energy to the stage with her 'A Wah So Strings' collection.

The line had vibrant colours and cuts. Kadian Nicely was next with outfits that had clean finishes.

Coco Johnson also brought energy to the stage with ruffles, glitter, bows and fringes, with a few bathing suits in the mix. Leading up to the break, the audience got even more entertainment from a modelling competition. In the end, a little girl outclassed her older competitors with struts and poses. She won a laptop for her efforts.

Khalil Hatitude and Courtney Washington were some other collections to acknowledge Jamaica 50 with designs in the colours of the Jamaican flag. There were also designs from Andre Shirley, Nish and Andrew Rowe.

On this occasion, Gregory HOD was not as dramatic, opting instead for pastel colours for several pieces.

Other collections came from White Sky, Franz Christie and Rick B's, who had some strong pieces.

Despite the high expectations that have become par for the course for overseas designer Indashio, his designs, while colourful, were not cohesive.