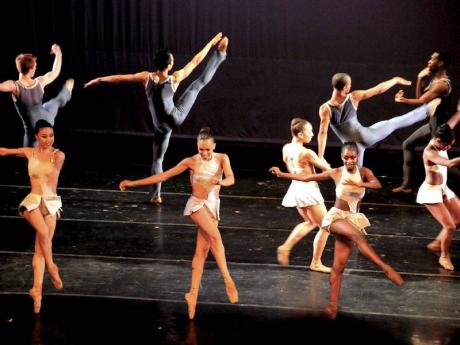 The Dance Theatre of Harlem Ensemble executes a piece from Robert Garland's 'Return' during Celebrating the Ties that Bind: 50 Years of Friendship', which was held by The Embassy of the United States of America at The Little Theatre last Friday. - Winston Sill/Freelance Photographer

"One good thing about the arts, you see something and you have to make sense of it for yourself. And, the thing that is engaging to me, as an artist, is to understand that you can create a story that you believe in most. I can tell you what the choreographer had in mind, but the important thing is for an audience member to be engaged enough to think about what is happening," said Virginia Johnson, artistic director of The Dance Theatre of Harlem Ensemble.

And the guests who were in attendance at the special performance of The Dance Theatre Harlem Ensemble last Friday would agree that there was much to think about.

From the first opening of the red curtains at the Little Theatre to their final closure, that audience was treated to an optimum display of superb balance, fantastic control, amazing body extensions, good formation, complemented by appropriate costumes and lighting designs.

There was no set, nor were there any props, just excellent use of bodies. it was classical and neo-classical ballet at its best.

The occasion was a red-carpet affair presented by the Kingston Embassy of the United States of America, and titled Celebrating the Ties that Bind: 50 Years of Friendship'.

After a welcome and introduction from Yolanda Kerney, public affairs officer at the embassy, followed by greetings from Ambassador Pamela Bridgewater, it was show time.

And from the first dance, Six Piano Pieces (Harlem Style), choreographed by David Fernandez, those present knew something different was happening.

That sense of being part of something different was given further leg when piano soloist Melody Fader took her seat at a piano placed down stage right. As she played, the six motifs unfolded. And to an extent, all lived up to expectation.

There was more beauty and grace to come during the performance of Fredrick Davis and Lourdes Rodriguez in Peter Pucci's choreography of Episode, one of the most intriguing dances on the programme.

Choreographed to the music of Nana Simopoulos, Episode presented an embroidery of bodies draped in Christiana Giannini-designed black and red uni-tards. The dance literally illustrates episodes in a relationship.

At times the couple which Episode depicts are in agreement with each other, and at others, in conflict. But the beauty was that the dance could also be interpreted on another level. A struggle between the artist and the art form.

Episode was followed by New Bach, choreographed by Robert Garland.

New Bach creatively employed its movement to tell a story in three motifs.

But for some like Tony Wilson, artistic director of the Company Dance Theatre, the Christopher Huggins In the Mirror of her Mind was the outstanding dance.

In the Mirror of her Mind opened the second segment of the programme. Renée Bharath Kim, Davon Doane, Samuel Wilson and Anthony Savoy were the dancers. It began with a tableau: a girl lying on the floor and three men forming a semicircle around her. The men, two of African descent and a European, are dressed in brown. Interestingly, one wore a dress over his pants, perhaps a symbolic single parent. The girl wore a red dress. The powerful dance seemed to be an exploration of different relationships.

After what appeared to be a pattern of violent affairs, the girl returns to the gentle touch of her "mother". As it turns out, the entire scene could have been a dream.

And after four dances, the ensemble solidified its performance with a very entertaining Garland choreography called Return.

The dance first premiered in 1999 and is performed to uptempo music from James Brown, Alfred Ellis, Aretha Franklin and Carolyn Franklin.

With some timely movements, the dancers had the audience laughing and rocking to Baby, Baby, Baby and the creative Call Me.

Perhaps because of the fusion of ballet with pop, it was a favourite of the audience.

Among that audience was Bert Rose, one of the founders of the Jamaica's National Dance Theatre Company.

At the conclusion of the dance, he, like other members of the audience, rose for a standing ovation, and fittingly so.