No IMF deal likely before autumn 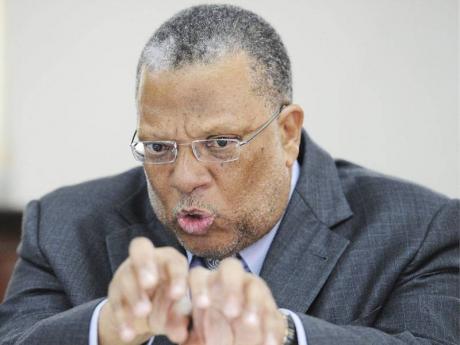 Dr Peter Phillips, minister of finance, planning and public service, at a breakfast meeting with Gleaner editors and reporters on Tuesday, May 29. - Ricardo Makyn/Staff Photographer

Despite an austerity budget and the initial stabs at tax reforms he delivered last week, Jamaica is unlikely to conclude an economic support agreement with the International Monetary Fund (IMF) before October or November, finance minister Peter Phillips has confirmed.

Stung by the failure of the previous administration to aggressively pursue fiscal reform under the standby agreement, the Fund apparently wants credible evidence of the new government's willingness to push through economically tough decisions.

"That's about right," Phillips agreed Tuesday, when asked the mostly likely timeline for a deal with the IMF after a working breakfast with Gleaner editors and reporters.

"It is not an immediate thing," he said. "We have months more (of negotiations)."

The previous Jamaica Labour Party administration in 2010 entered a 27-month, US$1.27-billion standby agreement with the IMF, which should have concluded this May. Within a year, however, the agreement was falling apart under the weight of government's inability to meet fiscal targets, as well as deliver on tax, pension and employment reforms.

Last week, as he unveiled a J$19.36-billion tax package to help close a J$275-billion gap in his 2012-13 budget, Phillips told Parliament that the IMF had not set down preconditions for a new agreement. Yet, he declared there were "important actions that we will have to carry out before an agreement with the Fund will be entertained by its board".

While he again insisted that the IMF had asked government for "no specific prior conditions" before an agreement, Phillips suggested that "a white paper on tax reform" was one of the things that would probably help smooth the path to an agreement.

The IMF had pressed to the government to pull down the public sector wage bill from nearly 12 per cent of gross domestic product to around nine per cent, but the prospect of reaching that target was shot when the administration agreed to paying outstanding increases and adjustments that resulted from the reclassification of teachers.

The IMF expected that concession to pay outstanding increases would grow the wage bill by 2.3 per cent of GDP at a point where Government should be looking to contract salaries.

Phillips' is negotiating with public-sector unions and has apparently floated the possibility of reinstituting wage freeze, similar to one that was in place in the early 2000s - rather than job cuts.

With regard to taxes, his budget contained some measures to widen the net, including lowering general consumption tax by one percentage point to 16.5 per cent and applying the rate to a wider range of items.

But there was not the comprehensive overhaul that was expected to have been in place by now, when the previous government published a green paper on the issue a year ago.

Debate on tax reform was slowed down by last December's general election, but Phillips repeated Tuesday that the overhaul of the system was to be rolled out over three years, with the next major step to be the publication of the white paper.

The previous government also published a green paper on public pension reform, on which there has already been some technical discussion, but not robust public debate.

At the breakfast meeting, Phillips stressed that the idea of these reforms ought not be taken as IMF conditionalities, but rather as important moves to begin to deal with an unsustainable debt of J$1.66 trillion.

"If we do not accept it (programme of reform)," he said, "we must accept what the risks are."