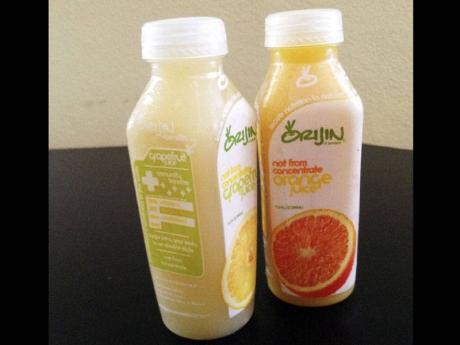 They are new players in juice manufacturing, but the owners of Orijin say they expected nothing less than a competitive field amid reports that they are now jockeying for position on grocery shelves against other household brands.

"Competition is a part of life," said McConnell, who in 2011 left a family-owned business to hang out his own shingle. "The refrigerated juice shelf is always very competitive. You have to have a product that gets the sales. It is a pretty established game," he said.

He says his main rivals include Tru-Juice, which is produced by another set of McConnells, and Country Style juice.

Orijin's differentiation is that the product is made from natural juice. Its packaging boldly declares 'not from concentrate'.

McConnell said that he and Jaime, who is also his partner in the business, have spent J$30 million to date to construct the 7,500-square foot factory at Flankers on the outskirts of Montego Bay, and to buy machinery, packaging and equipment, McConnell tells Wednesday Business. The company has six employees.

Bare Nutrition began producing Orijin in January. It now distributes through the Progressive Group, Hi-Lo, Family Pride, and other supermarkets. It recently added MegaMart to its distribution channel, which the McConnells consider a coup.

"We have signed with Megamart, which is a big deal for us. We also continue distribution through the Progressive group, including Loshusan," he said.

"Half the battle is getting into these outlets."

Bare Nutrition does not have its own orchards but purchases fruits both locally and from other Caricom countries.

"We are basically a bottler and distributor of fruit juices. This frees up our time to develop better products and gives us the ability to go into other things," said Mcconnell.

There are no connections with other juice makers, he said. Bare Nutrition does its own distribution with one truck, with plans to add another two or three trucks as needed.

"We are approaching this project on a phase-by-phase basis, with each change timed to coincide with our need for more capacity," McConnell said.

Currently, Bare Nutrition produces 400 cases of orange, grapefruit and coconut water weekly. The product is made from natural juices.

The McConnells say that they are about to spend another J$8 million to produce at a faster rate, improve the shelf life of the products, and pave the way for the addition of new, naturally flavoured juices.

"We have enough space to grow our business through efficiencies and more automation with higher speed machinery. We are embarking on a small improvement to the process now, which will improve efficiency and output," McConnell said.

The brand identity of Orijin lies in the absence of preservatives, sugar and other elements which detract from nutritive value and taste.

However, its shelf life needs to be improved, which McConnell said will be done by improving sanitation through technology and not by adding preservatives or using concentrate.

"Those who use concentrate have to add back Vitamin C and flavours. We wanted to stick to as close to the natural product as we can. This caters to the consumer who wants a healthier alternative," he said.

"We started this company because there was niche there not being filled. The product is really aimed at the health-conscious consumer. We wanted to come out with the healthiest juice possible."

Flankers was chosen as a location, he said, because of the price of real estate in the location, the quality of infrastructure and the proximity to his wife's family. Jaime is the daughter of Gordon 'Butch' Stewart, the founder and owner of the Sandals Resort group of hotels. Two of Stewart's hotels are a short hop from Flankers.

Bare Nutrition hopes to start exporting in 12 months, once the issue of the product's shelf life is resolved.

McConnell says Bare Nutrition has been lucky to find employees willing to put in overtime.

"They are amazing, dedicated and loyal. We now have six employees and counting," he said.