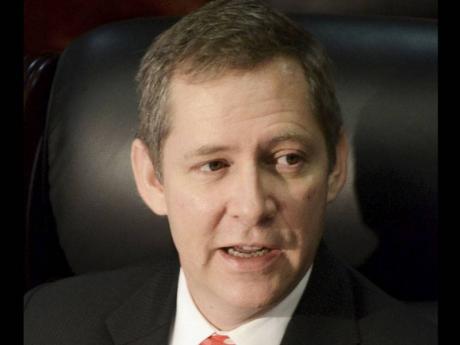 Scotia Group Jamaica said Tuesday that the bank has hit a phase in its growth cycle beyond which it is difficult to add market share.

Still, president and CEO Bruce Bowen said the group is targeting new products and expansion of its loan book as a way to build momentum.

"If you look at our market share overall, it tends to be between 30 and 40 per cent," he said at a briefing on the Scotia Group's second quarter results.

The bank's growth strategy will therefore target areas of the business whose market share falls below the 30-40 per cent range.

The building society subsidiary, for example, has a 12 per cent share of the mortgage loan market among building societies, according to Bank of Jamaica data for the December 2011 quarter.

"... It is a little easier for us to get to that natural market share than to take an already 30 to 40 per cent market share and grow it beyond that, because there is a maximum market share beyond which it is very hard to grow," said Bowen.

Scotia Group reported total operating revenue of $7.79 billion for the second quarter ended April 30, representing an increase of 4 per cent year on year. Profit for the quarter fell marginally to J$2.7 billion in the review period from J$2.8 billion in the April 2011 quarter.

The majority of the revenue growth, said Bowen, came from the insurance subsidiary, alongside some growth in loans.

"We have over 700,000 individual customers and we have to make sure that we are satisfying all their financial needs, and so we are trying to make the experience of dealing with the bank, insurance and brokerage companies a much more seamless experience," said Bowen.

Going forward, the bank president cited mortgage loans and the SME market, as well as insurance and investment as areas with growth potential.

"We have been growing our product line in insurance; we want to continue to build out our personal line on the insurance side," Bowen said.

SJLIC also began distribution of a third-party product, Heritage Education, and hopes to bring additional products to the market in 2013.

"In relation to approved retirement scheme, which is a relatively new market segment, SJLIC is number one in terms of market share with 57 per cent. It's an area we will continue to focus on," said Hugh Reid, general manager for SJLIC.

"Indeed, we believe this is an area of unlimited potential as roughly eight out of every 10 Jamaicans have either no participation in superannuation fund or approved retirement scheme," he said.

The bank's wealth arm, Scotia Investment Jamaica Limited, already has three unit trust funds on the market and plans to launch new products, but did not disclose a timeline.

"We will continue to build off balance sheet and we now dominate the unit trust market with a 55 per cent market share," said Lissant Mitchell, chief executive officer of Scotia Investment Jamaica Limited.