No social comfort for poor 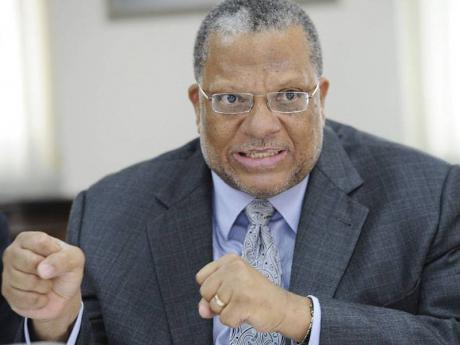 Finance Minister Dr Peter Phillips is animated during yesterday's Gleaner Editors' Forum. The minister has consistently said that Jamaica can no longer kick the can down the road, but must tackle debt reduction frontally. - Ricardo Makyn/Staff Photographer

There are great grounds for scepticism about the 2012-2013 national Budget because there seems no way out for a country with increasing unemployment, a soaring debt-to-GDP ratio and appalling living conditions and depravity for many thousands.

The idea that the country should be grateful for a one percentage-point decrease in the general consumption tax is laughable when one considers that beef patties, for many years the poor man's lunch, are now being taxed.

To be fair, Finance Minister Dr Peter Philips appears to have had very little room to manoeuvre - with the country on the verge of seeking a new agreement with the International Monetary Fund (IMF). But tackling the deficit by bringing down government spending is only one part of the solution. There must be increased production to fuel growth. I have been searching diligently, without success, for the Budget's growth plan.

We are left to believe that even the most skilfully crafted Budget could not have done anything to protect the poor. I reject that notion. The sad truth is that the Budget lacked innovation and creativity.

What is there in this Budget that will stimulate business investment and encourage start-up companies? Where are the incentives for companies that employ new graduates from our tertiary institutions? What is in it for companies that want to participate in the energy revolution? Where are the economic incentives for persons to produce more and earn our way out of the current economic rut?

For example, what was in this Budget to ensure the availability of credit for business expansion? It seems that new taxes will lead to banks restricting their lending to all sectors.

One senses a rising panic in those who had pinned their hopes on a government which promised to balance the books while balancing people's lives coming through for them. But, in truth, nothing in Dr Phillips' Budget will lift the mask of depression and stabilise the economy, thereby helping the majority of low- and middle-income families to reduce their bills for utilities, groceries, fuel, and motor vehicle licensing.

The ripple effect of the Budget will be fully felt when services such as transportation, restaurant and hotel services are increased in keeping with the new taxes. The hotel industry, which has been under severe pressure since the onset of the global recession, is visibly angry at the new taxes and there are indications that some may go out of business, raising the prospect of job cuts and loss of revenue to Government.

Appeals for help from families are growing, and the lifestyle of pensioners and retirees is fast eroding as they try to make ends meet. It seems everyone is feeling the pinch and will have to seriously cut back. What are government members doing to demonstrate that they, too, understand the austerity crunch and the meaning of fiscal discipline? This is one of the first times I have seen a Budget presented without any attempt to dress it in political and social rhetoric.

Sadly, this is a Budget that will trap many more Jamaicans in poverty. If 'fiscal responsibility' means the country can find money for various celebrations this Jubilee year, why do we have to tax patties?

Dennie Quill is a veteran media practitioner. Email feedback to columns@gleanerjm.com and denniequill@hotmail.com.