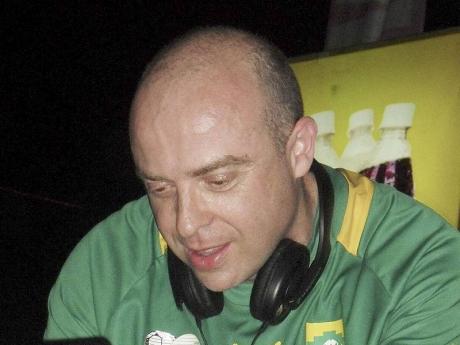 Over the weekend, the Admiral came to the town of Treasure Beach to participate at the Calabash Literary Festival. He sat down with The Gleaner and shared his story.

DJ Admiral, born Andy Kasrils, is a South African who specialises in playing dancehall and reggae on his sound system, African Storm, in South Africa. He is not the stereotypical dancehall DJ image. He is a 40-something-year-old white man who is a fluent Patois speaker.

Admiral is used to defying convention. He grew up in an environment where his parents, the late Eleanor Kasrils, and Ronnie Kasrils, were members of the African National Congress (ANC). The couple fought apartheid, the official South African policy of racial separation and discrimination.

Admiral told The Gleaner that at one point his family lived in exile in London and he was directly involved in the struggle as well.

"I do have military background in the ANC freedom struggle. I worked for many years as a printer, printing the underground literature. This led me to volunteer for the ANC army and I spent two years in the bush in Angola in 1987 and 1988."

After his tenure in the army, Admiral went back to the United Kingdom, where he resided until 1994 before returning to South Africa where he has been living ever since.

Admiral said it is the bold quality of reggae that attracted him to the genre.

"Reggae music struck the same notes. If you listen to any of the conscious tunes, these tracks about war which were about South Africa and the struggle that we were involved in," said Admiral.

In London, he was living near Willesden and Harlesden, which have a high concentration of Jamaicans. This helped to solidify his love for reggae. He said he got into playing music with his friends, who would practise their skills on 45s, dub versions they regularly collected.

After a while, Admiral had collected enough music to start playing. He began doing so while he was working as a printer.

Playing in a professional capacity came about when Admiral was invited to South Africa by a friend to substitute on a radio show. He took up the offer, the radio audience loved it, and he has been a reggae DJ ever since.

It was Admiral's first time in Jamaica. He is ecstatic about coming to the place he learned of when he was voicing on rhythm tracks.

Admiral is a fan of the Shabba era of dancehall music, the late '80s and '90s. Many Jamaican artistes have inspired Admiral, among them are Yellowman, Brigadier Jerry, Super Cat, Tenor Saw and Nitty Gritty.

He is in tune with current music and likes Mavado, Tanya Stephens, Sizzla, and Bugle.

Admiral said he is also appreciative of female artistes like Queen Ifrica and Lady Saw, who he describes as "something special".

Apart from his personal connection with Jamaican music, Admiral has already reached out to local artistes, having a solo album in 1997 based on the rhythm inspired by Bennie Man's Dancehall Queen.

Admiral said he, along with DJ Jaseed of African Storm, did a remix of Caveman's 'Plant Seed' rhythm, which Sizzla used on How Come. The song is part of Sizzla's new album, The Chant.

Admiral said experiences of the two countries are what create a connection between them.

According to Admiral, South Africans listen to a diverse range of music, but conceded that dancehall and reggae had a minority audience.

On the other hand, the music of the masses is a house-based variety known as Kwaito, which Admiral said has elements of dancehall.

Admiral's latest venture is a radio show on YFM in Johannesburg every Wednesday night with Jaseed. Going forward, Admiral insists that a link between Jamaica and South Africa be maintained.

"Everybody is trying to build the country, we are looking for solutions. It's a developing-world problem, that's why we must keep linking up to find the way forward for us," said Admiral.