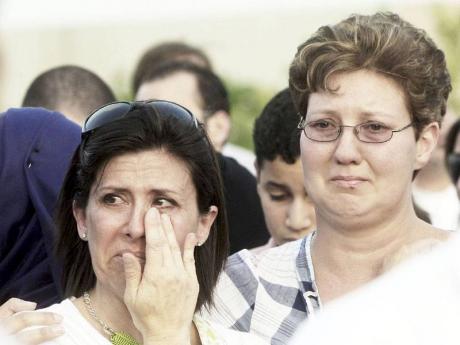 Two women react at a memorial held on Tuesday at the 'Aspire Zone' close to the scene where two-year-old New Zealand triplets perished in a massive fire that tore through a nursery at a Qatar shopping mall in Doha.

Investigators in Qatar carried out their first extensive probes through a fire-ravaged daycare centre and other charred areas inside the country's biggest mall yesterday after a blaze that killed 19 people, including 13 children.

The blaze and equipment failures that hampered firefighting raised questions about safety measures in the megastructures across the wealthy Gulf.

The findings from the state-ordered inquest are expected within a week, the official Qatar News Agency said. But commentators quickly called for extensive safety reviews after the sprinkler system malfunctioned during Monday's fire.

The tragedy also is likely to push authorities across the Gulf to further examine fire safety rules in a region where the drive to build fast and big has brought concerns about the level of emergency planning.

Rescue crews in Qatar's capital Doha had to hack through the roof of the mammoth Villaggio mall to reach the childcare facility, where the victims included two-year-old New Zealand triplets and three Spanish siblings. Two firefighters were also killed.

"What happened is similar to murder because of the lack of safety measures in such complexes," said wrote Saleh al-Kuwari, editor of the Al Raya newspaper in Doha.