Judges pressured to use blasphemy laws 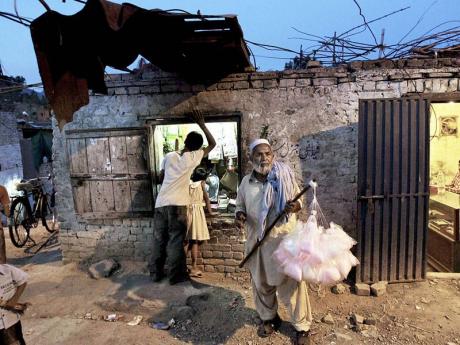 A Pakistani man (centre), who sells cotton candy, stands in an alley of a Christian neighbourhood hoping to sell it, in Islamabad, Pakistan, yesterday. - ap

Pakistani judges are often pressured to convict people accused under the country's blasphemy laws that call for the death penalty for anyone insulting Islam, a special UN representative said yesterday.

Gabriela Knaul, the UN's Special Rapporteur on the independence of judges and lawyers, told a news conference that lawyers are also reluctant to defend clients accused under the blasphemy laws because of intimidation.

Pakistan's blasphemy laws call for the death penalty for anyone insulting Islam, its holy book or the Prophet Muhammad. Pakistani Christians live in fear of being arrested under the laws, which critics say are often misused to settle personal scores or family feuds.

"I am especially concerned regarding cases brought under the so-called blasphemy law as it was reported to me that judges have been coerced to decide against the accused even without supporting evidence," Knaul said.

"They are afraid of reprisals by local communities because of their interpretation of the law," she added.

Lawyers who represent people accused in such cases are often targeted and not able to properly represent their clients, she said.