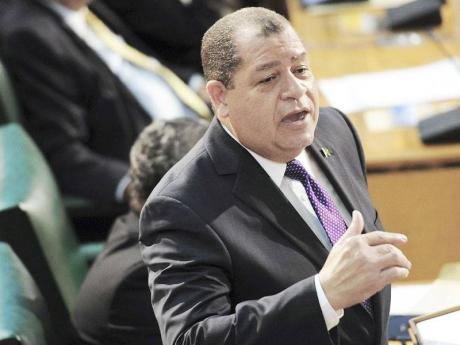 OPPOSITION SPOKESMAN on finance, Audley Shaw, says there are serious doubts about the ability of the Government to collect a vast amount of the projected $5.2 billion in new taxes from the telecommunications sector.

Shaw described as hostile and discriminatory, the proposal to impose a United States (US) $0.075 cent tax per minute on incoming international calls terminating on the mobile network.

"The measure is not well thought out and will either have to be abolished or will not realise the expected revenue," Shaw said.

The opposition spokesman pointed to US insistence that a levy that has been put on international calls terminating in Jamaica is discriminatory.

Jamaica currently imposes a levy of US two cents on mobile networks and US three cents on fixed network on international calls terminating to fund its e-learning programme through the Universal Access Fund.

"The new tax is now being imposed on top of a levy which is still being disputed. The tax itself has a doubtful legal basis and, from all appearances, will be uncollectible in the absence of agreements with the international telecoms carriers and the Federal Communications Commission," Shaw said.

He further argued that the Jamaican Government was imposing a tax with extraterritorial effect.

"The tax is being imposed on persons who are citizens of other countries not resident in Jamaica, and on the service that does not originate in Jamaica," Shaw said.

Last Friday, Phillips said the Government believed it was within its rights to impose the tax.

"We have sought the advice of the appropriate authorities in Jamaica and we believe that we are within our rights. Any other international authorities who have a view contrary to that are free to make their representations," Phillips had said during his post-Budget press conference.

The minister also said that, under the international telecommunications treaty, there are exceptions that allow developing countries to impose a levy.

He, however, noted that it "is a matter that the lawyers can determine and the diplomats".

"I am simply trying to close a gap."

In the meantime, Shaw said even if there were no protests about the tax, there were doubts about whether it was collectable this year.

He argued that settlement arrangements and implementation would take time as carriers would not be able to impose a tax on behalf of the Government without more due diligence.