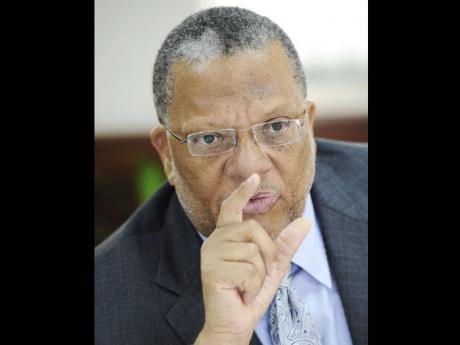 AMID CRITICISMS of a deepening trust deficit between Government and the people, Jamaica's minister of finance, Dr Peter Phillips, says the country's political leaders should exchange populism for the greater good of the country.

"The real challenge of our politics is to be able to debate more of the things that are of national interest and subordinate the partisan competition, which just allows everybody to take the easy populist route," Phillips said during a Gleaner Editors' Forum at the newspaper's North Street offices yesterday.

The minister said populist politics has sapped the hopes of many citizens who dream of a great Jamaica.

"No doubt there's a great trust deficit between the population and the political establishment for understandable reasons. We have been in the circumstance of no progress and shattered dreams for so long that many people have become cynical, and that is understandable also.

"The fact of its [trust deficit's] existence is not going to absolve us of the need to transcend it."

The Simpson Miller administration has come under fire for many of the tax measures since Phillips announced a $19.3-billion tax package in the House of Representatives last Thursday.

Among the unpopular measures is the imposition of general consumption tax (GCT) on some basic food items and on printed materials, including textbooks.

Phillips also announced an increase in the rate of GCT for electricity from 10 per cent to 16.5 per cent. The move runs counter to an election promise to remove GCT from electricity.

Instead of removing the tax, which was charged for consumption above 200kWh, the Government has increased the threshold above which the tax can be charged to 300kWh.

Phillips said 90 per cent of JPS residential customers will not be paying tax on electricity. It represents an increase from 76 per cent when the threshold was 200kWh. He said, however, that registered businesses could benefit from rebates.

Yesterday, the finance minister continued to defend the Government's action, saying it represented a delivery on the commitment.

"There is no doubt that in the election campaign, the priority concern was the impact, particularly on the struggling middle class, that was being pushed down," Phillips said.

He added: "Political communication in settings of large numbers is a challenge because it often relies on the symbolic and, therefore, the absolute - black and white."

In the meantime, Phillips said the Government's job now was to explain to Jamaicans why it has taken some of the unpopular decisions.

"We can explain as honestly, as sincerely, as comprehensively as we can, what the basis of the various decisions were and the public will decide," the minister said.

At the same time, Phillips said the country's current situation requires patriotic Jamaicans to unite to rescue the country, which he said is on the edge of survival.

"What we really need is almost a rebirth of the national movement in its heyday, something that can unite us around the prospect of survival as a viable nation state, because I think that is at risk at this point in time."