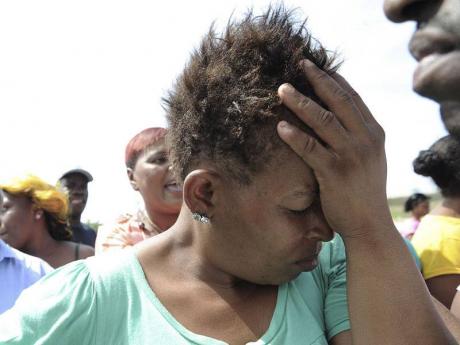 Opal Kerr mourns the loss of her son, 15-year-old Lennox Lloyd Jr, who died when the Toyota Hiace minibus he was travelling in overturned in Portmore, St Catherine yesterday. 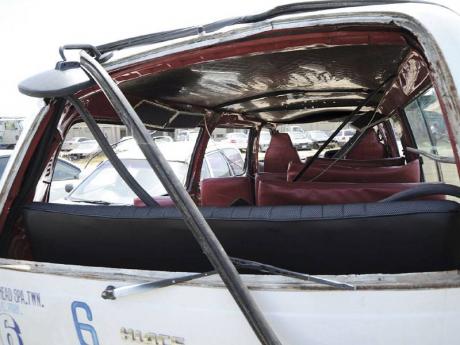 It took place so fast 12-year-old Reeka Gabay still has no idea what happened.

One minute she was sitting beside 15-year-old Lennox Lloyd Jr in a Toyota Hiace minibus heading to school; the next minute she was fighting her way out from under several injured students and coming face-to-face with Lennox's dead body, partly under the overturned bus.

The first-form student of Bridge-port High School was so scared she started to cry.

"When the bus drop, everybody drop on top of me and it was like before it drop, me never know nothing at all. For a while me just sit down suh, don't know what happen, then me start scream a tell everybody to come off me," she recounted.

"Lennox was sitting by the window and it look like him fly out the window when it crash and the bus drop on top of him."

It was just after 7:00 yesterday morning when Lennox, Reeka and several other students were heading to school on-board the minibus that plied the Naggo Head to Spanish Town, St Catherine, route.

According to eyewitness accounts, which have been disputed by the police, on reaching the vicinity of the Portmore HEART Academy and Portmore Town Centre, the bus was signalled to stop by personnel from the Transport Authority. It sped off and a chase ensued. The bus turned off route to West Trade Way in the vicinity of the Maxie Department Store where it crashed into an embankment and overturned into a ditch.

The grade-eight Ascot High School student reportedly died on the spot, while several students were injured and seven taken to the hospital. The driver and the conductor reportedly fled the scene.

Reeka remembered the first time she met Lennox when she visited his church, Miracle Open Bible, to perform and "him and him friend them give me trouble".

She held her back in pain, bruised and swollen from the accident. Still in a daze, she was conscious of the fact that she had just narrowly escaped death.

An angry mob soon converged on the scene and the rage flared even more when grieving, stunned parents and teachers arrived with probing questions but got no satisfactory answers. This only compounded their grief.

The Transport Authority personnel were forced to leave before things turned ugly.

The fuming crowd had attempted to block the entrance to the Portmore toll road in the vicinity of the Portmore Mall, but armed police personnel were quick on the scene, preventing the action.

Mother in a daze

Hand on head and tears streaming down her face, Lennox's mother, Opal Kerr, was in a daze.

"A school him a guh yuh nuh, suh what happen?" she inquired. "Me never expect to deh a work and get a call say this. Me neva expect this."

She burst into uncontrollable bawling as she tried to come to grips with losing her third child.

"Me son a good youth yuh nuh, everywhere me go him there behind me," she wailed.

When his father, Lennox Sr, arrived, he shot countless questions, demanding answers and demanding to see his son.

"How him get fi dead? Where them carry him gone? Where is that? Me need fi see him. How you mean me can't see him? Wey him blood deh? Wey di driver deh? So him kill me son, mi favourite, and gone?"

Onlookers, friends and family tried to answer each one of the grief-stricken father's questions.

The parents remembered their son as a fun-loving young man who enjoyed playing football and participating in church activities. He often talked about wanting to one day "fly a plane".

Over by Ascot High School, classmates and teachers were still in shock, many unable to control the tears. One of their own had died, while several others were hospitalised.

"He is not just another life lost," said one of Lennox's teachers. "He was a young man with dreams."

A police investigation has been launched into the incident, while the driver of the minibus is now in police custody.