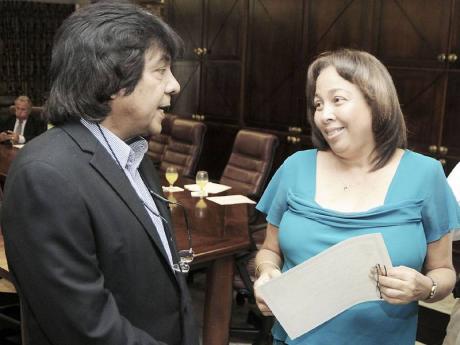 Executive Chairman of Guardsman Group Limited Kenneth Benjamin has said ornamental fisheries is a multibillion-dollar venture that has the potential to inject energy into the nation's battered economy.

Benjamin said on Monday that there is a US$6-billion worldwide market that Jamaica should try to tap into in order to claim at least a 10 per cent stake.

He was speaking with The Gleaner following a graduation ceremony for the Guardsman Group's first batch of trainees in ornamental fish breeding at the company's St Andrew offices.

"Jamaica is very well poised. We have the right climate and we have the right water condition and if we can develop a good industry out of it, it certainly can go a long way in contributing towards the recovery of our economy by creating employment," he said.

Benjamin added: "If we can get 10 per cent of that we would be way ahead of the game, but to get to the 10 per cent, a lot of work has to go in. We have hundreds of farmers producing fish, there has to be a coordinated effort of quality control, marketing and shipping."

Avery Smikle, director of the Spanish Town, St Catherine-located Aquaculture Branch of the Fisheries Division in the agriculture ministry, admitted that it was a lucrative business, but said plans to develop the sector were under review.

"The previous Government had concluded an aquaculture development plan, which looks at the entire aquaculture subsector and a strategy for the development of the sector, but it has not yet been tabled for adoption by the Government. It is currently undergoing review," Smikle told The Gleaner.

She added: "There are a couple of groups that are trying to rebuild the export aspect of the sector, but in the past, we have had a fairly vibrant export market for the product."

The four-week-long programme conducted by Guardsman Group was done in collaboration with the United States Agency for International Development, the University of Technology and The Competitiveness Company.

Benjamin said his training programme was a move in the right direction to grow the industry, but acknowledged that it would take greater effort from private sector companies to move the sector forward.

Nicardo Neil, marketing and project manager at The Competitiveness Company, said the four persons in the group were chosen based on their ability to grasp the concepts.

"We want to train eight persons because there are already fish farmers in Jamaica who breed and provide fish, but what we want to do is to have more dedicated breeders because ornamental fish is a volume business."